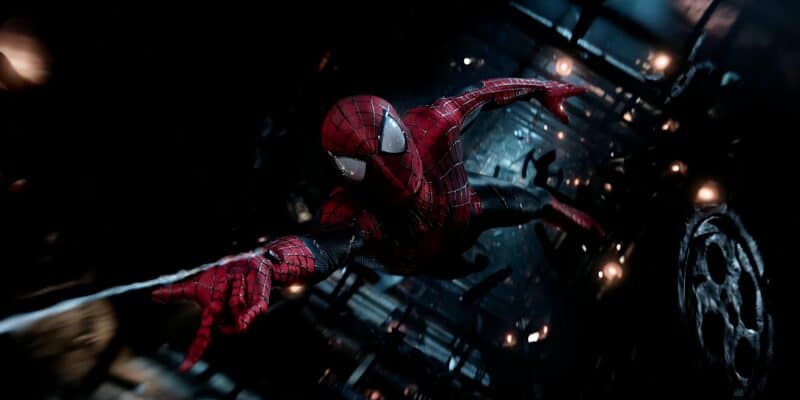 After teasing the end of the Spider-Verse earlier this year, Marvel Comics has now officially named the forthcoming ongoing comic series, seemingly rebooting the Spider-Man and Spider-Verse story once again.

Stan Lee and Steve Ditko’s wall-crawling web-slinger from New York City is one of the Marvel franchise’s most famous characters. 1962’s “Amazing Fantasy #15”, marked the hero’s first appearance with the superhero celebrating his 60th anniversary this year. The occasion will be marked with a 900th issue of “The Amazing Spider-Man” from Marvel Comics, which also just debuted a brand-new villain.

Alongside Marvel Comics’ run of “The Amazing Spider-Man”, a new limited series — “The Edge of the Spider-Verse” — from Dan Slott and Mark Bagley, with contributions also from comic book writers like Alex Segura and Karla Pacheco will release. The series sees multiple versions of Spider-Man like Spider-Woman, Ghost-Spider, Miles Morales, Silk, and, arguably, most excitingly, Spider-Rex.

Now, it has been confirmed that the End of the Spider-Verse will commence this October with “Spider-Man #1”.

Marvel.com describes the new Marvel Comics “Spider-Man #1” as the following:

The new saga will kick off when a threat emerges that will change the fate of Peter Parker and all his fellow Spider icons such as Spider-Woman, Ghost-Spider, Miles Morales, Silk, and more, including the new heroes that will debut in EDGE OF SPIDER-VERSE. The series will also tie directly into the events of Zeb Wells and John Romita Jr.’s AMAZING SPIDER-MAN run, picking up plot elements such as Spidey’s new costume and his mysterious association with Norman Osborn!

Morlun is back and he is not alone. Allied with one of the most powerful beings known to the Spider-Verse, the scariest Spider-Villain of all time is making his biggest play and no Spider is safe. Especially not the Chosen Spider himself, Peter Parker. With Peter working for Norman Osborn and using a glider… does he have it coming?

Mark and I are two guys who live to tell Spider-Man stories. Cut us and we bleed Spider-Man. And now Marvel has entrusted the two of us to bring back their monthly– adjectiveless– SPIDER-MAN title!

Slott added a rather enticing statement:

It’s going to have lots of action, surprises, but, most of all, it’s going to have a lot of heart! Even though this story will be epic, it will also have a profound effect on Peter Parker. You are not going to want to miss this!”

The first issue of this “adjectiveless” Spider-Man title will release on October 5, 2022.

Where Spider-Man is deep into the Multiverse in Marvel Comics lore, it was only recently that Kevin Feige’s Marvel Cinematic Universe and the Amy Pascal-helmed Sony’s Spider-Man Universe dipped into the unbound possibilities of the Multiverse.

In terms of live-action, Venom: Let There Be Carnage (2021) revealed that, somehow, Eddie Brock/Venom (Tom Hardy) existed in a world with Tom Holland’s Spider-Man — the actor’s character is shared by Marvel Studios and Sony Pictures, so many fans felt it was inevitable that the two worlds would collide at some point.

This, of course, became the selling point of the MCU’s recent feature, Spider-Man: No Way Home (2021), which saw Holland request help from the franchise’s new “Iron Man”, Doctor Strange (Benedict Cumberbatch). He was joined by Tobey Maguire and Andrew Garfield as Peter Parker/Spider-Man from their respective Sony series, Spider-Man, and The Amazing Spider-Man, in addition to villain actors like Willem Dafoe (Norman Osborn/Green Goblin) and Alfred Molina (Otto Octavius/Doctor Octopus), bringing more iconic characters together.

What is clear, is that in both live-action, animated movies, and on the pages of comic books, the Spider-Verse has increasing potential.

Will you be picking up “Spider-Man #1”? Let us know in the comments down below!