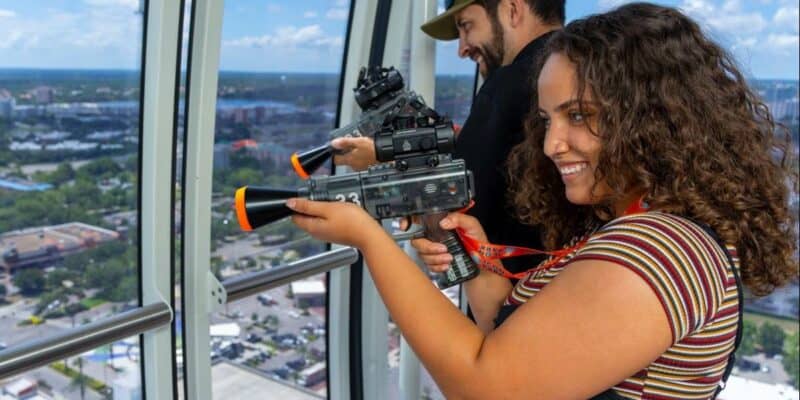 A popular amusement park in Orlando, Florida is now facing some intense backlash after revealing a new gun-based attraction experience.

ICON Park, the amusement park that was at the center of controversy earlier this year is now at the center of another media frenzy. As reported by News Channel 8, the Park recently announced that it will be adding what they call Bullseye Blast to the huge The Wheel which is the park’s 400-foot tall Ferris wheel ride.

The game/attraction hybrid is described as a competition for riders where Guests will use laser blasters to hit targets placed around Orlando as they take advantage of the height provided by The Wheel.

Walt Disney World offers experiences like this such as Buzz Lightyear’s Space Ranger Spin and Toy Story Mania! as well as MEN IN BLACK Alien Attack at Universal Studios in Orlando.

“As their air-conditioned capsule ascends above Orlando, players scan the rooftops of ICON Park to find 50 strategically pre-selected targets with varying degrees of difficulty,” said park officials in a news release today. “To get the highest score possible, players need to hit as many of these as possible with their laser blaster during the 18-minute ride.”

Each player will be given one blaster equipped with a scope and an infrared beam which will, “assist them when aiming at the targets.” The Bullseye Blast will cost $5.95 to play, in addition to the price of a ticket to ride The Wheel attraction.

ICON Park proudly stated that The Wheel is “the only observation wheel in the world to provide this amazing, new infrared technology, and effectively gamify and reinvigorate the experience to an entirely new audience of gamers.”

Though this sounds like a fun-filled time as you battle with other Guests in your party, some have voiced concerns with the new attraction, calling it problematic and offensive. Many drew comparisons to recent mass shootings the country has faced recently, claiming this attraction is incredibly insensitive.

In response to the announcement, User @OhioPianoGuy said, “Horribly insensitive. Apparently, @iconparkorlando learned NOTHING from the mass shooting in Vegas. Or Pulse. Or…..”. User @TheBananaPatch said, “This seems really problematic lol.”

User @disneylander28 said, “What do you think was going through Icon Park’s mind when they thought this would be a good idea? It’s called Bullseye Blast”.

People also reminded the park about its most recent controversy, in which 14-year-old Tyre Sampson tragically fell to his death on the Orlando Freefall ride. This tragic incident took place earlier this year on March 24. According to a report released by law enforcement last month, Sampson slipped out of his seat at the halfway mark of Orlando Freefall’s drop.

Users were quick to point out ICON Park’s possible lack of judgment on the addition of this Bullseye Blast game, telling them to “read the room”. As of now, ICON Park has not made any statement or response to these criticisms.

Have you visited Icon Park in Orlando?