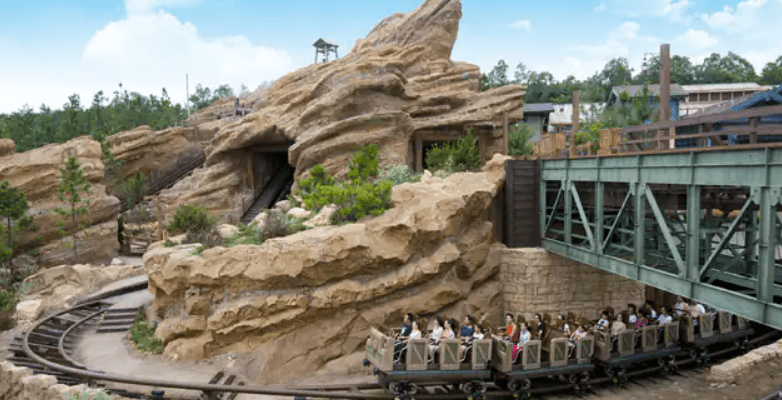 This has been a year of celebrations for Disney Parks worldwide.

#GrizzlyGulch is turning 10 tomorrow, the park has prepared a huge coloured pavement art to celebrate the occasion.

Grizzly Gulch is the Hong Kong Disneyland equivalent of Frontierland. It was opened in 2012 as the second and largest area of the Park’s multi-year expansion project, transporting Guests to a Wild West mining town resembling a golden era of hope, adventure, and opportunity. This thrilling and distinctive themed area was the first experience of its kind at any Disney Park around the world, and to this day remains a beloved area of the Park.

Grizzly Gulch’s centerpiece is The Big Grizzly Mountain Runaway Mine Cars. This attraction takes Guests on a thrilling adventure aboard a runaway train that goes forwards, backwards, and crisscrosses in and around the entire area.

The Wildest Ride in the West!

Streak through a mountain, plummet downhill and zip around a legendary gold mining town—forward and backward!

Venture inside the Big Grizzly Mountain Mining Company building, erected in the early days of California’s Gold Rush. Amid flickering kerosene lanterns, wander past a dusty sawmill, rusty prospectors’ lockers and the cluttered workshop of the chief geologist before boarding a mysterious mine car waiting to take you on an excursion inside the old mountain.

Hang Onto Your Hats!

Hurl forward into the darkness of a tunnel as your train’s wheels chug back and forth across a winding track. Make your way past a family of friendly bears—rumored to have led to the discovery of gold in the mountain—and swoop around inside a barren canyon. Without warning, veer off-course and dart down into a perilous mine shaft—the result of a bear who scratched his itchy back on the track switch—before picking up speed and peeling out into the woods.

Gaining momentum, your mine car is sent racing up a steep rocky incline; but before it can make it to the top, a cable unexpectedly snaps and sends you barreling—backward—down the mountain! Tumble through dimly lit tunnels in reverse and stumble past jagged caverns before speeding into a TNT storage cave, where a mama bear and her cub are unwittingly perched dangerously close to a pile of explosives.

Will the dynamite ignite and blast you out of the mountain? They don’t call it “runaway mine cars” for nothing!

At Grizzly Gulch, Guests can also find Geyser Gulch, a quaint town with a leaky water tower, an old geyser, and a watery battle between 2 stores that invite daring prospectors to splash it up and cool off.

With so much to see and do at Grizzly Gulch, it’s no wonder Guests and Cast Members alike are so excited to celebrate this land’s tenth anniversary!

Hong Kong Disneyland, located near Penney’s Bay, Lantau Island, Hong Kong, is an incredibly popular Park that brings in millions of Guests each year. After opening in 2005, Guests quickly came to love the theme Park as much as Walt Disney World Resort or Disneyland Resort! Like its American counterparts, Hong Kong Disneyland has a ton of Disney Hotels to visit!

The entertainment offerings at Hong Kong Disneyland are beyond magical. Momentous recently made its debut, mesmerizing Guests with over 20 minutes of music and a stunning combination of multimedia elements, including projection mapping, water projections, theatrical lighting, lasers, choreographed water fountains, flames, pyrotechnics, and firework effects.

Have you ever visited Grizzly Gulch at Hong Kong Disneyland? Let us know in the comments below!