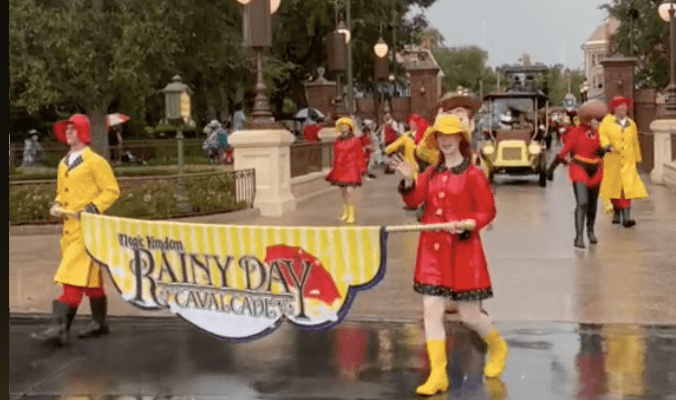 There have been increased reports of severe storms dousing the Florida theme parks in recent weeks, with major flooding taking place on some occasions. Known as Florida’s wet season, summer storms are something that Guests have come to expect, with few seeing it as a deterrent when it comes to purchasing park tickets.

Some Guests have made the best of it, naming puddles before crashing into them in their character-themed ponchos. Others use it as a rest day to enjoy their resort’s amenities.

While severe weather often slows or even cancels some normal operations, Disney appears to remain committed to making magic for those who remain in the parks, which can at times include offerings for Guests that otherwise wouldn’t be realistic.

A recent TikTok video showed a rainy day cavalcade loaded with characters greeting those who chose to stick the weather out.

For some Guests, this is a once-in-a-trip experience because regularly, these characters would be scattered across the parks engaged in individual meet and greets, often with long lines. Even some regular parade offerings don’t contain this much star power!

Under normal circumstances, Walt Disney World regularly hosts the Disney Festival of Fantasy Parade down Main Street at the Magic Kingdom. At Disneyland, Guests can enjoy the notorious Main Street Electrical Parade until it finishes its fun on September 1, 2022.

What is your favorite rainy day activity at the Disney Parks? Comment your answer below!