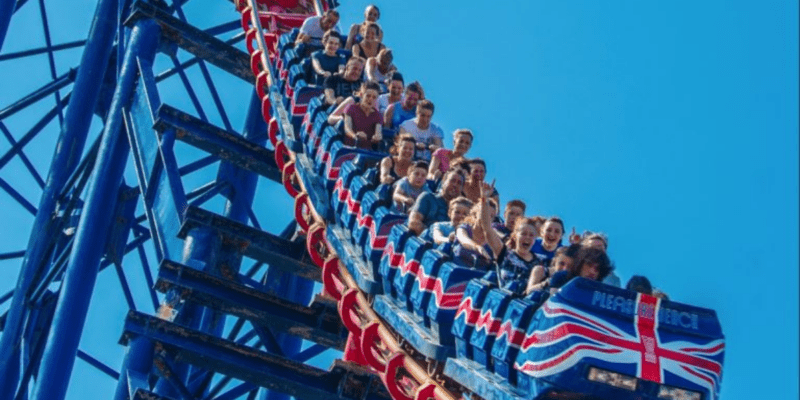 A popular theme park recently turned away a Guest, denying him entrance to the Park after finding out he was carrying medical cannabis due to a medical condition.

Theme parks are a family-friendly environment where everyone can enjoy thrilling rides, fun attractions, great entertainment, delicious dining offerings, and so many more activities! However, there are unpleasant situations where Guests are turned away or removed from the Park for several reasons. While in most cases, this can happen when Guests break the rules and regulations set out by the theme park, there can be situations when Guests are denied entry to the Parks unjustifiably.

Recently, a Guest was denied entry to Blackpool Pleasure Beach, in the county of Lancashire, Northwest England, because he was carrying medical cannabis and what theme park officials described as “drug paraphernalia,” despite having a medical cannabis prescription with him at all times.

The 28-year-old, who has held a prescription for cannabis to manage his mental health issues for several years, visited the popular amusement park on June 30 with some friends who had traveled from the US. However, the group was held at the gate regardless of the medication being in its original packaging and this Guest having a copy of his prescription, which was considered invalid as the United Kingdom National Health Service had not issued it.

When the Guest asked to speak to a manager, he was told that this wouldn’t be possible, as they were on a meeting, but was let know that he wouldn’t be able to take his medication into the Park due to concerns about the children on site.

The Guest commented the following to Cannabis Health News:

While I didn’t think the legitimacy of the medication was an issue, they still treated it differently from everything else. If I had walked in with an inhaler or with codeine, it would have been fine.

They asked what it was for, but I didn’t really want to disclose my personal medical information. It doesn’t really matter what it’s for – you wouldn’t ask that if that was insulin for diabetes.

The Guest added, “I’m prescribed cannabis for anxiety and am currently awaiting diagnosis for complex PTSD. I don’t have much time, if I feel an anxiety attack come on I need to nip it in the bud there and then. That’s a difficulty that people don’t understand.” After this unpleasant incident, he decided to leave the Park, as he didn’t want to risk spending the day without his medication.

Related: Family “Shocked” After Son Was Denied From Theme Park Because of His Size

In a statement to Cannabis Health, a spokesperson for Blackpool Pleasure Beach commented the following regarding the incident:

We have been in correspondence with Alex regarding his recent visit to Blackpool Pleasure Beach.

On arrival at Blackpool Pleasure Beach Alex had not purchased a ticket to enter the park.  If he had done, his attention would have been drawn to our Terms and Conditions of entry.

Upon approaching our park entrance area, and in accordance with our Terms and Conditions, he was subject to a security search as is the same for all guests entering Blackpool Pleasure Beach. That search revealed drug paraphernalia. A resolution was reached with Alex, should he have chosen to enter our amusement park but in the event he did not and left.

Your comparator to a person with a diabetes condition is not, in our opinion, an appropriate one.

Related: Guest Fires Up Social Media After Starting a Petition Against This Theme Park Activity

While it is true that every theme park sets out specific rules and regulations Guests are expected to comply with, this particular case was especially complicated for the parties involved. Unfortunately for patients, the public use of medical cannabis is still controversial, even with a prescription. This situation is even more delicate in a theme park, considering that many would see its consumption as a disruptive activity, not to mention that it would go against the rules at most theme parks worldwide.

What do you think of this situation? Do you agree with the Park’s decision? Let us know in the comments below!