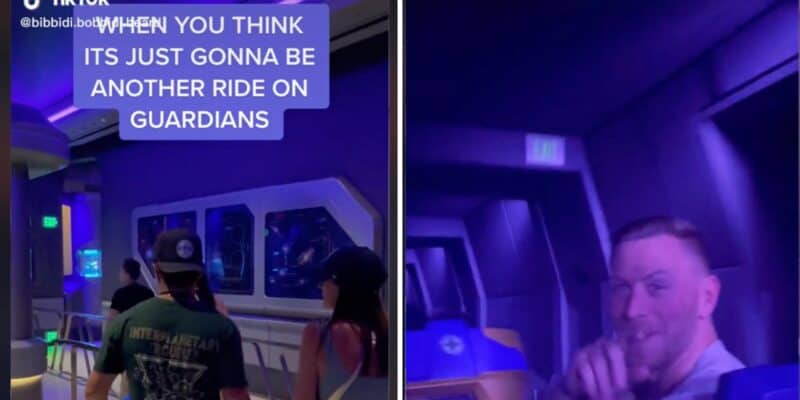 TikToker Cole Manning shared his recent experience riding Guardians of the Galaxy: Cosmic Rewind earlier this month. He claimed that what was expected to be the normally thrilling coaster experience turned out to be a terrifying, at times pitch black ride with a roll back, a sudden restart, and a largely silent end, outside of fellow passenger screams.

Here is the original video account he uploaded on July 2, 2022.

♬ what in the jesus christ was that – sam

The video is dark and a bit chaotic, but Cole, a self proclaimed Disney adult, Star Wars nerd, and Marvel geek, captioned his experience over the footage.

He shared that his coaster failed to make it to the top of one of the attraction’s hills, resulting in the ride rolling backwards to a stop. He said in that moment that he was most fearful that another coaster would slam into them, as his party occupied the back rows.

As it turns out, several viewers commented that this rollback was an intentional safety feature that coasters of this kind possess, with many commenting that they were jealous of his experience.

“Rollback on launch coasters are the ultimate dream,” user Robbie DeBrucky wrote. ” This is one of the luckiest things to happen.”

User @Tyler agreed that experiencing a rollback on a Disney launch coaster was “truly special” and would be a dream come true.

It does seem that the roll-back Cole experienced is different than the intentional backwards launch that is included in the coaster’s innovative design, which Disney Parks Blog describes as  a “groundbreaking ride system with vehicles that rotate 360 degrees and can even do a reverse launch”.

Next, Cole said that as he and his crew sat still at the bottom of the hill that their coaster failed to climb, the audio continued to play through until its end and the screens cut to black.

Suddenly, they were relaunched without warning and “finished the ride in the darkness,” with no soundtrack other than the screams of their fellow riders.

This certainly isn’t the norm, as one of the more exciting features of the new EPCOT attraction is its personalized soundtrack. Once the attraction blasts off, Guests are surprised with one of six songs selected at random from the following options:

Though out of the ordinary, Cole’s experience riding Guardians of the Galaxy: Cosmic Rewind was memorable to say the least.

Have you ever been stuck on an attraction? Tell us your abnormal ride experience.