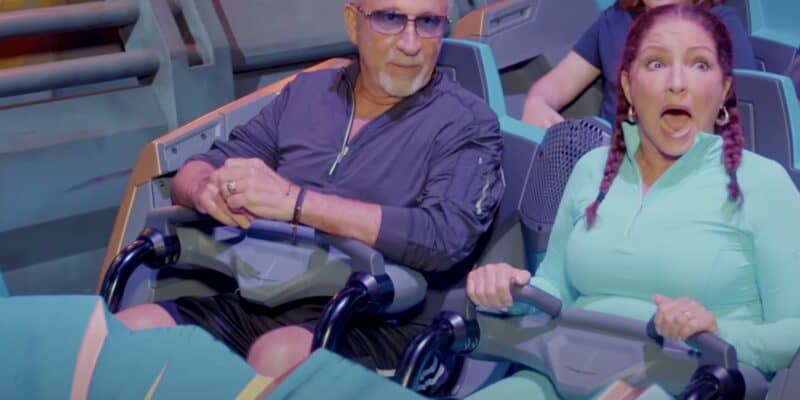 “Everybody loves it,” Gloria Estefan told Disney Parks Blog as they waited to board Guardians of the Galaxy: Cosmic Rewind. “We’re coaster people, so it’s phenomenal.”

The international stars and their grandson made this most recent trip to the Disney Parks in celebration of Sasha’s 10th birthday.

“It’s special, and a beautiful thing to be able to share,” Emilio said in appreciation of their time together at Walt Disney World. “When you get here, you forget about everything and have a great time with family. It’s a beautiful place to be.”

The experience was extra special for Gloria as her hit song “Conga” can be heard in the attractions “Awesome Mix,” a soundtrack that features six songs with one selected at random to play throughout the ride. Guests enjoy the element of surprise as they wait to hear which song blares during blast off.

With Gloria Estefan’s latin pop song “Conga” being released back in 1985, she expressed her elation for those who are now able to familiarize with her music in 2022 thanks to this attraction.

“My son was five when ‘Conga’ came out, and now his son, my grandson, is ten,” Gloria shared. “It is so special that new generations will be hearing the song on this ride because they will make the connection of ‘Conga’ to fun.”

Her husband echoed this sentiment as he expressed the pride he felt that the Latino community was now able to celebrate this signature sound together, recorded many years ago, in a new and exciting way.

EPCOT’s newest thrill ride opened its doors to the public on May 27 of this year, utilizing a virtual queue to board the attraction. Its innovative OmniCoaster ride system allows each individual cab to fully rotate in order to direct the rider’s attention to the storyline taking place around them.

It is Disney’s first ever reverse launch coaster, and is currently one of the biggest indoor coasters in the world.

Have you ridden Guardians of the Galaxy: Cosmic Rewind yet? Let us know what song you heard in the comments below!