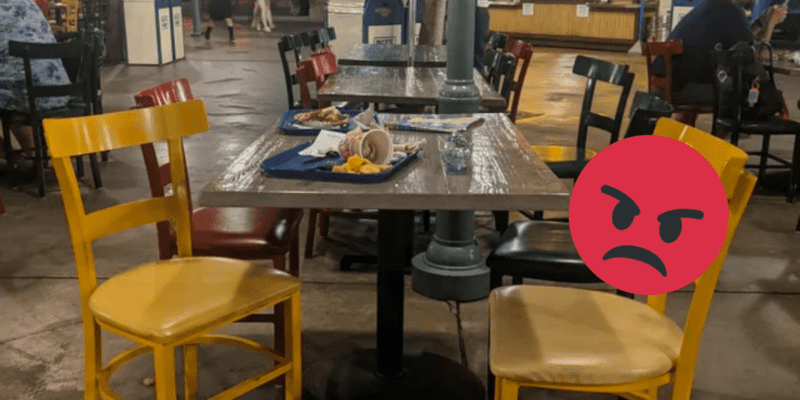 Related: Guests Shocked by Piles of Trash in Disney, “I Have Never Seen It So Bad”

One Disneyland Resort Guest took to Reddit to ask other Guests to make Cast Members’ lives easier. u/asthetixbrash shared a photo of a Quick Service dining table after a family left all of their trash instead of throwing it away at one of the many garbage cans visible in the picture:

Speaking of pet peeves, don’t be this person from Disneyland

The post received hundreds of votes of support and dozens of comments. Many fans pointed out the multiple trash cans just steps from the trashed table. u/aalvarado27 wrote:

I can’t imagine getting up after finishing and saying “this food was delicious! There’s a trash can literally right next to me, but I’m just gonna leave our trash here”

Same kind of person that doesn’t return shopping carts to the corral. Not the end of the world but tells a lot about them.

Others pointed out that in other countries, this is the norm. u/miloworld said:

Not sure if international travel is back but perhaps they are tourists from a part of the world where you don’t clean up after yourself in quick service. If you see it happen next time, ‘remind’ them by cleaning your own table.

Most Disneyland Resort fans agreed that Guests should clean up after themselves for the sake of Cast Members. u/sangriaflygirl wrote:

Dude, there are literally trash cans every 30 feet in DLR, there’s no excuse to not take the whole minute to throw away your trash. Cast members work hard enough as it is, why put this on them?