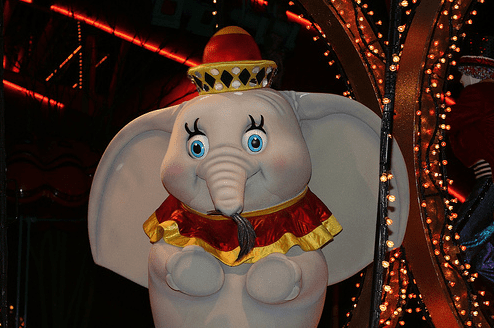 Walt Disney World can become hot, especially during the summertime. Unfortunately for Cast Members who are playing the role of characters, they cannot remove their heads in front of Guests, despite how hot it may become.

According to one report, the book Inside the Mouse details an unfortunate incident involving Dumbo and heat exhaustion.

One Cast Member shared in the book that they were playing the role of Dumbo during a parade at the Parks. Unfortunately, it was hot and they began to feel sick. The problem was, they could not remove their head because if they did, Disney would fire them. Per the report:

Sometimes, it’s even worse than fainting at a character meet-and-greet. One cast member described a moment where he played Dumbo in a parade. It was an awful day, he felt sick, and knew he was going to vomit. If he pulled the head off to do so, he’d lose his job and probably cause a few children’s future therapy bills along the way.

This only left one option — vomit inside the head. The report continued:

So, he threw up right in the head. It was so bad, barf started pouring out of the little mesh-covered hole where Dumbo’s mouth should be. The cast member, however, made it through the parade without beheading. He claims that, even if a character throws up or passes out on a float, nobody ever pulls them off the ride. You just keep waving and hope a kid thinks that Dumbo’s just leaking some magical flying juice.

It is not clear when this incident took place but it is unfortunate to see. We hope the Cast Member received the care and attention they needed.

The malfunction was a complete accident and no fault of the Cast Member portraying The Beast.

Have you ever seen a wardrobe malfunction at the Disney Parks? Let us know in the comments below.