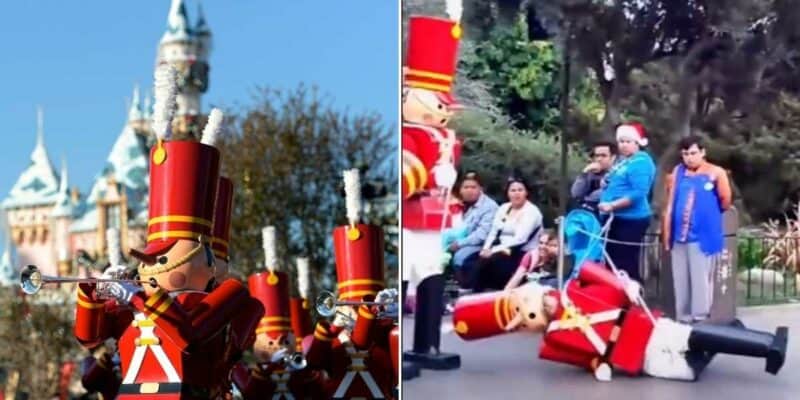 The holidays are in full swing at the Disney Parks! At Walt Disney World Resort, Guests are enjoying the now sold-out Very Merriest After Hours at Magic Kingdom along with EPCOT’s International Festival of the Holidays. At Disneyland Resort the Sleeping Beauty Castle is glowing with Wintertime Enchantment and “A Christmas Fantasy Parade” offers a perfect dose of holiday cheer. And while we like to think everything at Disney is filled with perfect magic, slip-ups do occur with, unfortunately, this one caught on camera.

Disneyland’s “A Christmas Fantasy Parade” is a fantastic way to celebrate the holidays. The parade is full of special Disney characters and holiday favorites such as prancing reindeer, marching toy soldiers, dancing gingerbread cookies, and more. Plus, Santa Claus himself wraps up the parade with a special wave hello. On this parade day, however, a toy soldier was marching along and toppled over which has now turned into a viral video.

The viral video posted by @chipandlex on December 10, 2021, currently has 8 million views. Despite the recent post and “#Christmas2021” noted with the video, we have confirmed that this video is roughly 9 years old!

We aren’t sure what exactly happened as you see a toy soldier take a fall. The bulky toy soldier costume makes getting up difficult. Thankfully a Cast Member jumped in to save the day by helping the toy soldier up and putting his head back on as Guests watch the episode unfold.

Check out the video below, or find it here:

Of course, the comments are rather entertaining for this viral video. One person comments, “Is that Kanye West that picked him up? lol”. Others commented on how long it took for someone to help with “Geez, don’t everyone jump up to help at once.” And we agree with the comment, “I have a lot of respect for all the Cast Members and what they do to keep the magic and after a fall getting up and carrying on.”

Way to go to the Cast Member that helped, and the toy soldier that got up and carried on!

Have you ever spotted a Disney character mishap? Let us know in the comments.