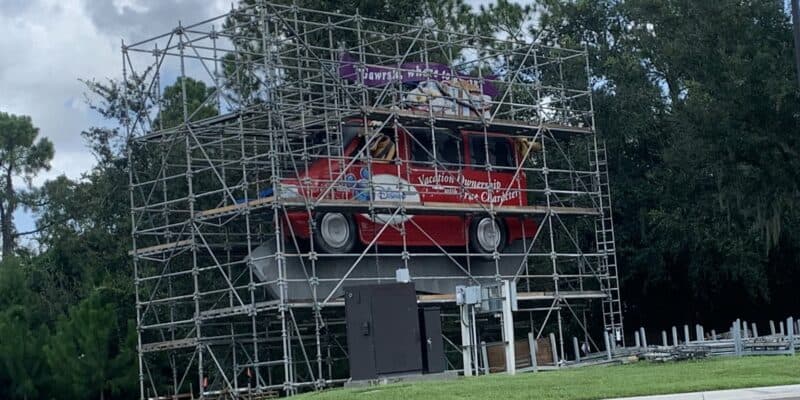 In the last few months, we have seen Disney destroy several structures that Guests would consider “iconic” at the Walt Disney World Resort. The first blow came in the form of the classic Tower of Terror sign which was demolished a few weeks ago. The second blow came when Guests found out Disney was removing the welcome sign, completely ripping both Minnie and Mickey from the installation.

A photo shared online sparked a debate about whether or not Disney is preparing to demolish yet another iconic road sign at Walt Disney World. This specific sign is the DVC sign, featuring Goofy, Pluto, and other characters in a van, presumably heading to one of the many Disney Vacation Club destinations.

Another photo of the sign was shared by ParkTwister on Twitter (@ParkTwister) which you can check out below:

DVC billboard on East Buena Vista Drive possible demolition taking place OR just a repaint? What do you think???

DVC billboard on East Buena Vista Drive possible demolition taking place OR just a repaint? What do you think??? 🤔 pic.twitter.com/YH16JYDoJ8

Another picture of this sign was shared by Mickey Central (@Mickey_Central):

D***. They sent this DVC billboard straight to jail!

Damn. They sent this DVC billboard straight to jail! pic.twitter.com/tQA2rQOdOP

As you can see, more scaffolding is now surrounding the sign, indicating that Disney may just be repainting the sign rather than destroying it like the beloved Tower of Terror sign earlier this month.

Disney has not made an official statement on the status of the sign or what it plans to do with it. Make sure to check back here at Inside the Magic for all future updates!

Would you miss this sign if Disney removed it?