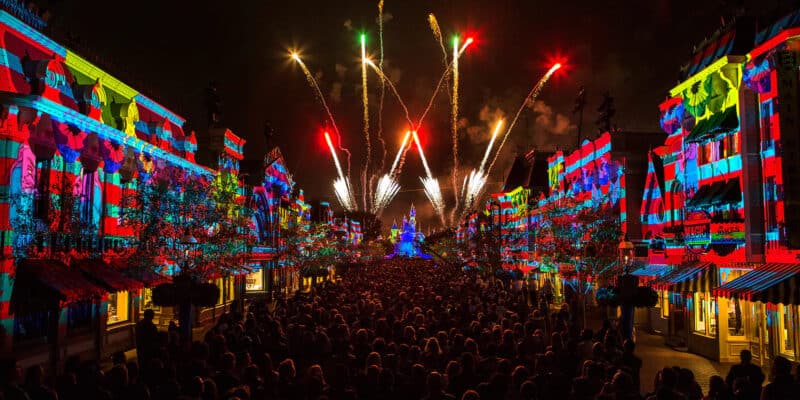 Among the things that define all Disney Parks are castles, Mickey Mouse, and, of course, fireworks. Disney has become known for incredible nighttime spectaculars that delight Guests of all ages.

From time to time, Disney changes it’s fireworks shows to bring Guests even more magic — there are holiday specials, for example,  including special spectaculars for the Christmas season and the Fourth of July — but sometimes the new performances are more permanent.

Many regular Walt Disney World Resort visitors were upset when the immensely popular Happily Ever After show was replaced with Disney Enchantment for the Park’s ongoing 50th anniversary celebration and, now, it seems that Disneyland Resort might also be getting a new fireworks spectacular for The Walt Disney Company’s 100th anniversary next year.

Per a recent report, a new project codenamed “Project Moonlight” is actually a brand new fireworks show for Disneyland Resort. While this is currently a rumor and has not been confirmed by Disney, the nighttime spectacular is reportedly called Wonderous and it’s debut — should the rumor mill be correct — will coincide with The Walt Disney Company’s 100th anniversary on January 27th, 2023.

The report indicates that an official announcement will be made at D23 Expo in September.

Again, at this time, no official confirmation of Wonderous has been shared by Disney.

The current Disneyland Forever nighttime fireworks and projection show is described as:

A World of Dreams Awaits You
Discover a spectacle like no other as you’re surrounded by a mesmerizing mix of breathtaking pyrotechnics and jaw-dropping visual effects.

One minute, you’re standing on Main Street, U.S.A. And the next, you’re transported to the worlds of timeless Disney tales—soaring over London with Peter Pan, stampeding across Simba’s Pride Lands, diving down under the sea with Nemo and friends, or caught up in a swirling snow flurry right out of Frozen!

Using all of Main Street, U.S.A. and iconic Disneyland locations like the Matterhorn mountain, Rivers of America and “it’s a small world” as its stage, this showcase takes you on an amazing adventure that proves just how magical The Happiest Place on Earth can be.

A Soundtrack Overflowing with Imagination
Topping off this immersive experience, Disneyland Forever features the song “Live the Magic” and the exit song “Kiss Goodnight,” the latter of which was written by Disney Legend Richard M. Sherman.

Do you hope Disneyland Park is getting a new fireworks spectacular?