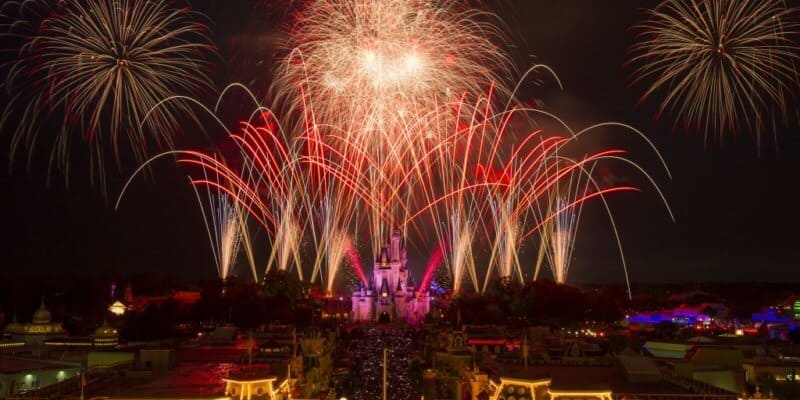 Walt Disney World may be closed for the Fourth of July holiday. However, that doesn’t mean you can’t see Magic Kingdom’s special Fourth of July fireworks celebration as Disney is streaming a previous version of the theme park’s nighttime spectacular online!

You can’t celebrate the Fourth of July without fireworks and no one does fireworks like the Disney Parks. For many Disney fans, you may typically celebrate the holiday by seeing the fireworks over Cinderella Castle. Although, given the current pandemic, this isn’t an option–at least, in person, it isn’t.

For those who don’t know, every year on the patriotic holiday Walt Disney World puts on their spectacular Fourth of July fireworks. The special show includes a mesmerizing pyrotechnic display and features a series of melodies celebrating America. Each year, the special fireworks are played on both July 3 and July 4. Although, given the temporary closure of the Walt Disney World parks, the company has decided to stream the 2018 viewing of the fireworks spectacular on the Disney Parks Blog.

This presentation is the third fireworks viewing that has come from #DisneyMagicMoments, a social media initiative dedicated to spreading magical moments to all of the Disney fans stuck at home during the current crisis.

Two previous presentations included a special stream of a previous recording of Happily Ever After fireworks show at Disney’s Magic Kingdom and Disney Illuminations fireworks show from Disneyland Paris!

In addition to these special showings, the #DisneyMagicMoments initiative also includes a free website that allows users to experience Disney, Pixar, Star Wars, Marvel, and National Geographic with stories, videos, and activities to inspire imagination and discovery among kids, fans, and families alike.

Will you be watching this special presentation of Disney’s spectacular Fourth of July fireworks to celebrate the holiday with your family? Let us know in the comments!