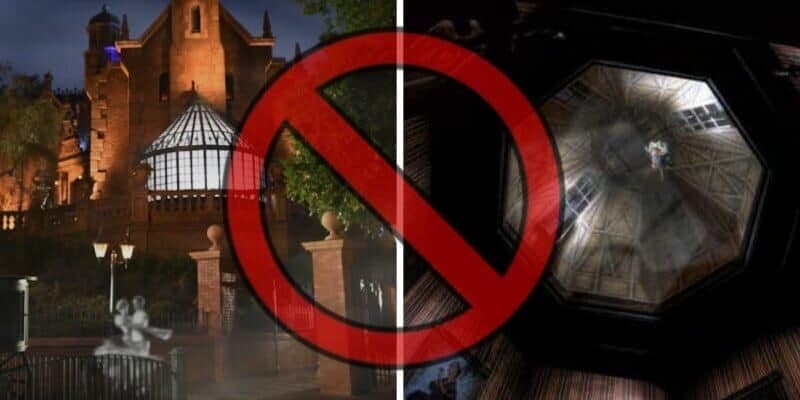 Back in June 2020, Disney fans debated if Disney should remove the hanging body scene on Haunted Mansion as it is extremely dark. Now, the discussion is circling the internet once again.

The Haunted Mansion is a popular attraction located in both Walt Disney World and Disneyland. The popular dark ride takes Guests through a mansion of haunted characters while riding aboard a Doom Buggy.

The spirited Haunted Mansion adventure will be guided by the “disembodied voice of the Ghost Host” as he is your private tour guide “through the cadaverous realm of an eerie haunted estate, home to ghosts, ghouls and supernatural surprises.” Beware of hitchhiking ghosts!

The specific scene that is once again getting a lot of attention is the hanging body scene. In a recent video posted to TikTok, Disney fans sparked a conversation around this scene, which takes place in the stretching room inside the Haunted Mansion at both Magic Kingdom in Walt Disney World and in New Orleans Square in Disneyland park:

Disney fan and TikTok user immersifymedia posted a video to TikTok, discussing the hanging body scene in the stretching room, saying “So, no one’s freaked out about the hanging body?”

“That never scared me but I think about it now and I’m like ‘that’s so dark for Disney’,” another fan said. And the other TikToker chimed in, “Well to start right off the bat with? Like I don’t know like, you get a ton of kids off the ride by that point.”

A ton of comments poured in as well, all of fans debating on if Disney should remove the scene from the ride.

You can watch the full video below or by clicking here.

Disney has come out and said they are aware of the complaints regarding the hanging scene in the Haunted Mansion attraction. Per a Los Angeles Times article:

Recently, some have called for the removal of a hanging scene in the Haunted Mansion, noting its association with suicide and lynchings.

Disney has heard those complaints, but for now, the scene will remain unchanged. “It’s been discussed for sure,” says Disney’s Michele Hobbs, who managed the Haunted Mansion refurbishment. “It’s definitely something that we’re thinking about.”

Do you think the hanging body scene is too dark for Disney? Let us know in the comments below.