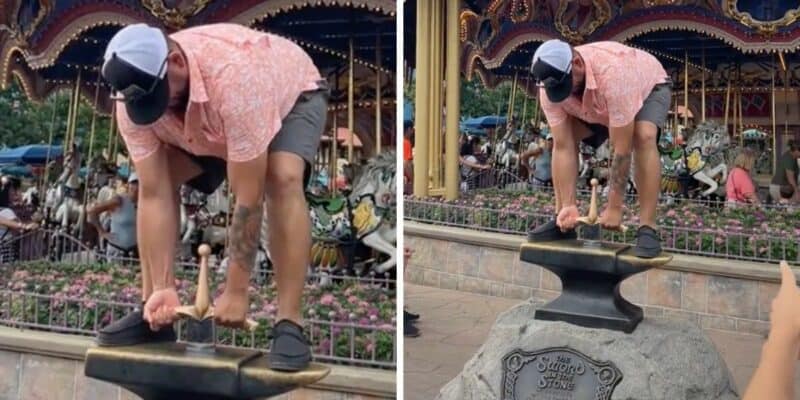 planDisney describes the experience as:

So you seek to become the rightful ruler of the Magic Kingdom, eh? Well of course you’d need to prove yourself worthy by pulling Excalibur from the stone as our, young friend Wort…er Arthur did. But that’s no easy feat. Directly in front of the Prince Charming Regal Carrousel is where you can find that legendary sword stuck mightily into an anvil atop a stone. As it was at the beginning of that classic film that we all know and love, there isn’t quite as much fanfare around it as there used to be when I was growing up. But Guests can still give it a tug to see if they’ve got what it takes. You never know when a worthy candidate for the crown may be chosen.

In a recent attempt to pull the sword from the stone, a Disney Guest decided to go above and beyond, unfortunately breaking the rules, to try and become worthy.

It seems that the Guest did not purposely break the rules as he was just trying to have fun, but it is important to note that Disney has rules and regulations in place for the safety of Guests. One of these rules include not climbing on structures as Guests could slip and fall and injure themselves.

Luckily, this Guest was okay, but just be mindful of the rules and regulations when visiting Walt Disney World.