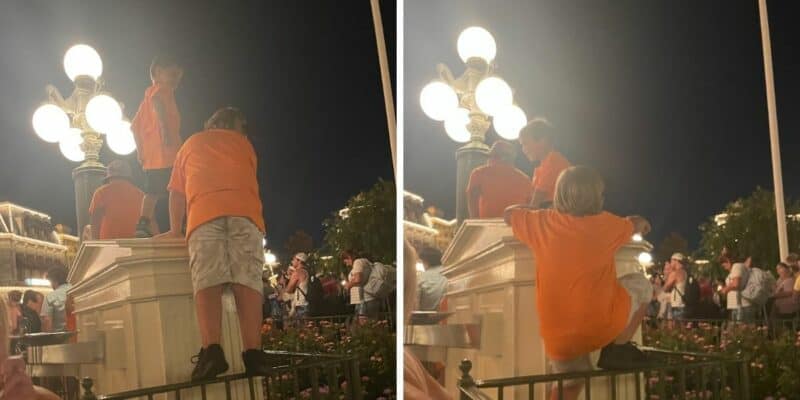 Last night, Magic Kingdom was packed with Guests who gathered in Main Street, U.S.A. to try and get the perfect view of Disney Enchantment, Disney’s new fireworks show that debuted for the 50th anniversary.

Because the Park was packed with Guests, some children had trouble seeing the fireworks. Those children decided to break the rules and climb onto a structure in order to try and get a better view.

For starters, if you have never seen Disney Enchantment, Disney describes it has:

An anonymous Guest sent us the following photos, showing multiple children climbing onto the structure in the hub in front of the train station. Once one child climb it, others followed.

It didn’t take long before a Cast Member came over and told the children they had to get down.

Related: Universal Calls Out Guest For Breaking Rules on Attraction

The children listened and got down as the mother came over to tell the kid to stay off. However, it was only a matter of minutes after the Cast Member left that the children decided to climb onto the structure again.

Fortunately, no children were injured but it is important to remember that Disney has rules and regulations in place for the safety of both the Guests and Cast Members. By climbing on this structure, these kids were breaking the rules, which could have led to an escort from the Park.