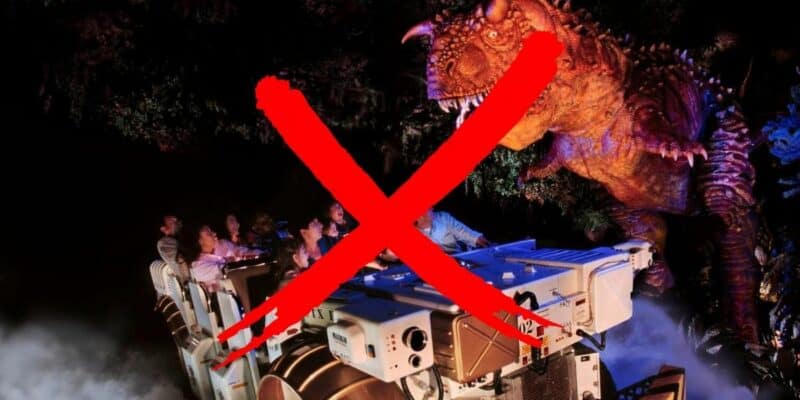 The DINOSAUR ride — which was originally called Countdown to Extinction — can be found in the DinoLand, U.S.A. area at Animal Kingdom. There are been talk lately on a possible retheme coming to the attraction, especially when Disney seemingly pulled the merchandise from the stores.

Although there has been no confirmation of a retheme at the time of publication, some sort of refurbishment may be on its way as for the past two weeks (at least), one iconic animatronic has been missing (with no indication of it returning), forcing the ride to operate in B-mode.

DINOSAUR opened in 1998 at Disney’s Animal Kingdom, and ever since, it has drawn the attention of Guests as they are eager to travel back in time and “get that dino.” Although many fans still have a love and appreciation for DINOSAUR, some Guests feel the ride is a bit dated.

This has sparked multiple conversations amongst fans, speculating a possible retheme may be coming. Even though Disney has not confirmed if a new IP will replace Dinosaur, one aspect of DINOSAUR has been non-operable for weeks.

When Guests ride DINOSAUR, about halfway through the search for the Iguanodon, the ride vehicle comes to a halting stop and Guests come face to face with a Carnotaurus (which is when your ride photo is taken). Typically, the Carnotaurus is on the right-hand side of the ride vehicle, and the animatronic is massive.

However, for the last two weeks, the ride has been operating in B-mode, and instead, Guests look to their left and just see the head of a Carnotaurus animatronic.

I, personally, have experienced this multiple times over the last two weeks. Yesterday, I rode DINOSAUR again and this time I made an effort to look to see if the iconic Carnotaurus animatronic was even still there. I am happy to report it is, however, it is covered in tarp and rope, indicating it may not return any time soon.

Again, at this time, there has been no confirmation of a retheme, but it seems as though Disney has no plans on fixing the massive Carnotaurus animatronic as it is currently covered in ropes and tarp.

Have you been on DINOSAUR? Have you noticed the ride has been operating in B-mode? Let us know in the comments below.