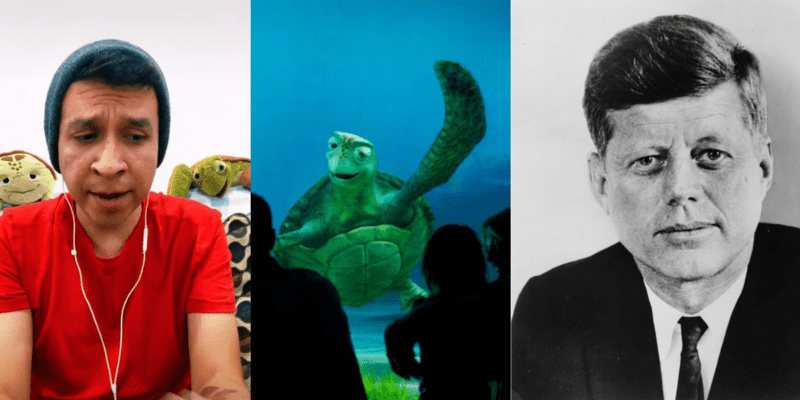 Turtle Talk with Crush offers Guests of all ages the unique experience of asking their favorite Finding Nemo (2003) sea turtle any question they desire.

One young Guest, however, took the opportunity to ask Crush about a particular historical event… John F. Kennedy’s assassination.

TikTok creator @tawmbien, a former entertainment Cast Member who voiced Crush at Disney California Adventure, took to TikTok to share the story of the memorable young Guest. A follower asked the creator if he’d ever been asked an inappropriate question, to which he responded:

sometimes! the kid in this story was totally innocent. he just happened to be obsessed with the topic.

Replying to @xxx.unknownblue sometimes! the kid in this story was totally innocent. he just happened to be obsessed with the topic.

In the video, the creator explains how he chose to respond to the question:

“There was this one kid who came in and asked Crush if he knew that JFK was assassinated. I’m like… So I’m telling him, like, ‘Aw, dude. That’s a bummer. You know, when bad things like that happen, I always tell Squirt to talk to a grown-up he trusts about it. And then we always play a game after to kind of take our mind off of things. Do you like hide and seek?’”

The former Disney Park Cast Member says that the boy found Crush, so he had the sea turtle come back on screen and make a joke for the adults in the room:

“So we play hide and seek, and he finds me. So I come out and say, ‘Oh, Sea Grassy Knoll… not a good hiding spot. Should’ve hid in the Babbling Brook Depository.’”

Grassy Knoll is a small green space in Dallas, Texas that marks the spot where President Kennedy was shot. The Texas School Book Depository, now known as the Dallas County Administration Building, is home to the sixth floor vantage point from which Lee Harvey Oswald shot Kennedy. It is now home to The Sixth Floor Museum at Dealey Plaza, which chronicles the life and assassination of the 35th President of the United States of America.

Turtle Talk with Crush opened at Walt Disney World Resort in EPCOT’s The Living Seas in 2004 and was duplicated in Hollywood Land at Disney California Adventure in 2005. The attraction was updated with characters from Pixar’s Finding Dory after the film’s 2016 release. From Disney:

What’s the funniest question you’ve heard at Turtle Talk with Crush? Share your story with us in the comments!