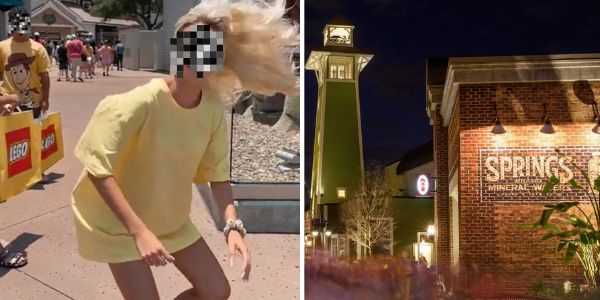 While Magic Kingdom, EPCOT, Hollywood Studios, and Animal Kingdom are all great places to visit when traveling to Walt Disney World, Guests looking to shop til you drop may want to head over to Disney’s huge shopping center known as Disney Springs.

At Disney Springs, Guests can find all kinds of stores, food, drinks, and live entertainment. From flexing your creative muscles at the LEGO Store to bowling at Splitsville Luxury Lanes, there’s no end in sight to fun and amazing experiences at Disney Springs.

Not to mention all of the amazing restaurants found here like The Boathouse, The Edison, or  Chef Art Smith’s Homecomin’. However, in the past, we have seen issues come up regarding how Guests act at Disney Springs, as the shopping center does not require any ticket or price of admission. While still owned by Disney, the atmosphere and rules are a little more lax here, resulting in a different experience than one might fund at Magic Kingdom or the rest of the Resort.

Unfortunately, some Guests may think it’s ok to do as they please no matter who might be watching. This was shown in a video recently posted on social media by u/gritty600 on Reddit which you can watch below:

Anything for views, but at Disney World right in front of the kids?

Anything for views, but at Disney World right in front of the kids? from IAmTheMainCharacter

As you can see, this Guest is at Disney Springs right in front of the LEGO Store filming a video. This is a fairly normal activity at Disney World but that all changes when the Guest hits the ground. It’s later revealed that the Guest is not wearing any pants, just a small swimsuit bottom.

Once on the ground, the Guest starts dancing and twerking, right in front of a family visiting Disney Springs. This video caused quite a firestorm online with hundreds of users bashing the Guest for doing this in a public area, especially one where kids would be watching.

One user in the comments said, “wait she INTENTIONALLY pulled her shirt down to show her a** and started to twerk knowing children were next to her. She’s gotta get charged with something”. Another commented, “Out of all the places in Disney and she chooses to make a fool of herself with what looks to be a restaurant or employee building in the background”

Another said, “That’s absolutely disgusting. I hope security walked her right out and she was permanently banned. Flashing is sexual assault.” We are unsure what happened after the video ends or if the Guest was approached by security.

Have you seen anything like this at the Disney Parks or Resorts?