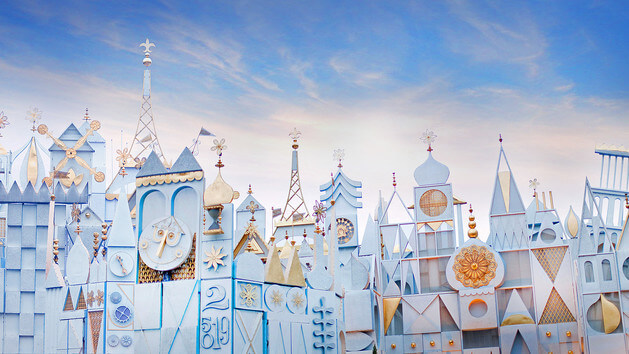 Disneyland's "it's a small world" backdrop mural was designed by Disney Legend Mary Blair and was the inspiration for the recent update of the ride's loading area at Magic Kingdom.

It truly became a small, small world after all for a few Disneyland Resort Guests this week!

Reddit user u/mrmaestro9420 posted a video taken while they and their wife were stuck on “it’s a small world” at Disneyland Resort. The Guest reported being stuck for 30 minutes, with no music and only the sound of the clacking animatronics:

There was a post maybe a week or two ago asking if it would be worse to have just the music without the dolls or the dolls without the music. Thanks to yesterday’s breakdown, we can answer that question. This went on for about 30 minutes. As my wife said “how in the world do you break Small World??”

There was a post maybe a week or two ago asking if it would be worse to have just the music without the dolls or the dolls without the music. Thanks to yesterday’s breakdown, we can answer that question. This went on for about 30 minutes. As my wife said “how in the world do you break Small World??” from Disneyland

A fellow Disney Parks fan commiserated, sharing a story of being stuck in silence on a different part of the ride:

Oh no! Flashbacks! We were once stuck in the Spanish room right by the Three Caballeros and the music stopped but they kept dancing and dancing and all you could hear was “click click click.”

“it’s a small world” opened in Fantasyland on May 28, 1966, 11 years after the opening of Disneyland Park. This all-ages, family-friendly boat ride takes Guests around a world of singing dolls. A similar ride opened with Magic Kingdom at Walt Disney World Resort on October 1, 1971. From Disney:

Have you ever been stuck on a ride at a Disney Park? Share your story with us in the comments!

Related: “it’s a small world” Got a Magical New Glow Up!

Comments Off on VIDEO: Guest Stuck on Ride Experiences 30 Minutes of Loud “Clacking”