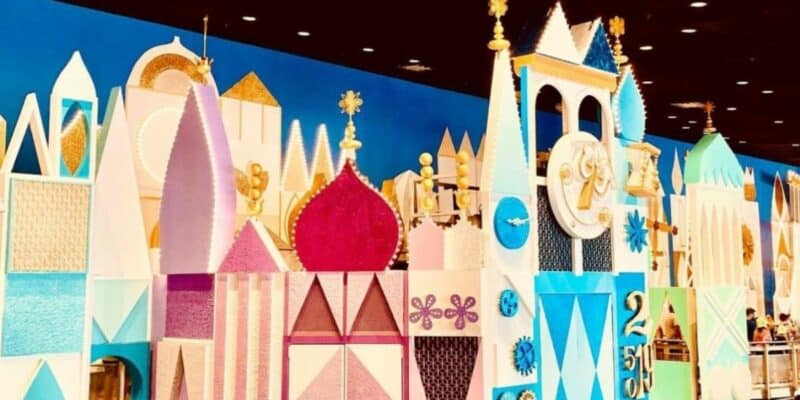 The 50th anniversary of Magic Kingdom and Walt Disney World Resort is officially underway, and there’s so much to celebrate! We have been watching a classic attraction in Fantasyland as its magical glow-up started several months ago. The final “it’s a small world” makeover looks to be full of color, and we are loving the new look!

It’s a Small World Got a Magical New Glow Up!

The Magic Travel Guy proclaims that “it’s a small world” is a must-ride attraction for him when visiting Magic Kingdom. Decorated for the Resort’s 50th anniversary, the new “it’s a small world” makeover is a rainbow beauty! Decorated from its initial white and gold facade (reminiscent of its Disneyland Park counterpart) the Walt Disney World version looks to be complete in its rainbow makeover.

After all, it’s “The Happiest Cruise That Ever Sailed!” Disney World sums up “it’s a small world” on its website as:

One of the most exciting takes we’ve seen came on Joy’s Instagram feed, where she captured the clock striking 12:00 noon, and the doors opening to numerals, music, and more.  And we’re going to agree with the Most Magical Zach on Twitter… it’s certainly one of the best glow-ups we’ve seen for the 50th anniversary. From Cinderella Castle’s new paint job to the Mad Tea Party turret, “it’s a small world’s” makeover is glorious and enchanting.

Still one of the best glow ups pic.twitter.com/Pxo4GQ7BsZ

Instagram user and Disney cosplayer, Zeus, captured his experience before, during, and after the ride. It’s here in his post that we notice the new rainbow facade represents all the beautiful colors found inside the attraction.

The Canadian and American Mclennan (Matt, Kelly, Layla & Lily) family recently visited Mary Blair’s inspired attractions this week, and fell in love with “it’s a small world”‘s new look! Their photo encompasses so many of the rainbow colors displayed to Disney Guests ready to board the boats.

“Love Small World! Ok so if you’re obsessed with Disney like me, you would notice Small World got a bit of a makeover on its original paint color. Now more vibrant for the Disney’s 50th Anniversary! We were lucky enough to see the clock open at 10:30, pretty neat!”

Now, Disneyland Lovers know full well that their original “it’s a small world” attraction has an outdoor queue line and facade. However, those visitors peeping the new look at Magic Kingdom are fairly forgiving on the indoor facade and queue line since its new look is so very colorful. Disneyland Guest Matthew (handle of @MHawk9955)  tweets, “‘it’s a small world”s new paint job is amazing… almost makes up for the facade being inside. ;)”

it’s a small world’s new paint job is amazing…almost makes up for the facade being inside. 😉 pic.twitter.com/kXzI9bysbg

Everyone seems to love the bright blue centerpiece of the ride, with its familiar smiling face twisting and tilting in the center. Leah of Five for the Road Blog uses the brilliant new facade to share her best tips for making a Walt Disney World Resort vacation affordable. We’re loving her vantage point!

Have you experienced the magical new “it’s a small world” makeover yet? Leave us a comment below!

Comments Off on “it’s a small world” Got a Magical New Glow Up!