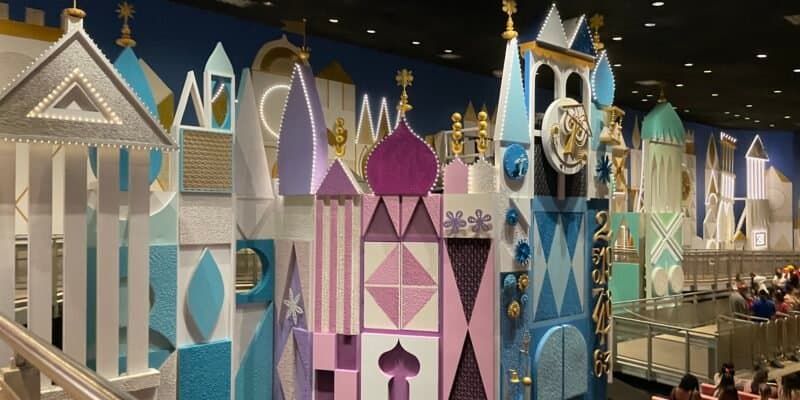 If you have been following all of the changes made at Disney World over the past few months to hear up for the 50th anniversary celebration, you may have realized a lot more than just Cinderella Castle is changing when it comes to Magic Kingdom.

Main Street, U.S.A. is getting a shimmering update, and many Fantasyland attractions and offerings are having upgrades done to make them extra special for the big day on October 1. We recently discussed how Princess Fairytale Hall received a brand-new 14-karat gold sign that glimmers under the Florida sun.

We also talked about how “it’s a small world” had one aspect of the interior facade turn blue, which was a stark difference from the white and gold color palette that we are used to.  We can see that Disney is clearly looking to turn the attraction into something a lot more colorful than we are used to.

Recently, “it’s a small world” added more colors to the facade because now, it is not just a blue clock tower, but yellow, pink, purple, and teal have also been added to the surrounding buildings.

Below, you can take a look at a few of the changes!

Interestingly enough, we can see that some of the paint jobs have also extended to the back of the facade so that Guests walking down the ramp part of the queue can still be immersed in the wonderful world of color!

From the looks of it, it seems that Disney is likely not yet done transforming the space. There are still many white buildings that may remain that way, but since we have seen an increase in paint over time, it would be an odd choice to stop halfway through the new change.

That being said, Disney had not discussed the attraction change at all, so we have no idea what the final result will be.

What do you think of the changes coming to this coveted and classic Magic Kingdom attraction?