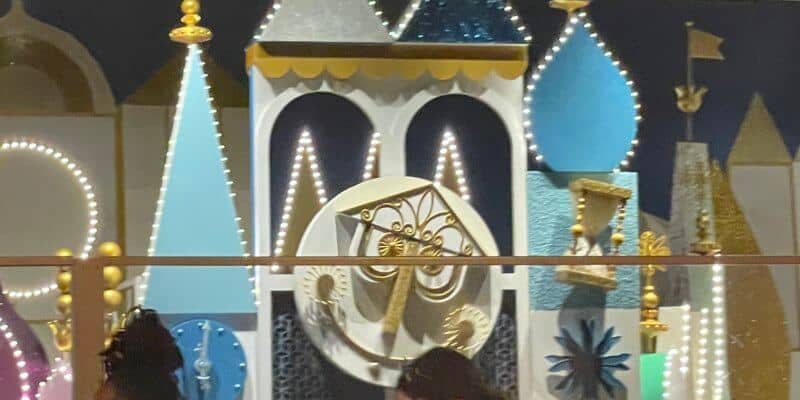 Lately, we have seen Disney World begin to gear up for its 50th anniversary transformation.

At EPCOT, Spaceship Earth will have sparkling points of light shine from the ball, alongside an all-new firework show, Harmonious. Disney’s Animal Kingdom will have projections on the Tree of Life, and at Disney’s Hollywood Studios, Guests can enjoy a sparkling Tower of Terror. However, Magic Kingdom has shown the majority of change and progress over the past few months.

We have seen the castle transform, and now, the rest of Fantasyland is transforming with it. Most recently, a major change that we noticed is that “it’s a small world” also looks to be joining the blue color scheme. Our heads quickly turned when stopping by the attraction as we noticed the clock tower, which has always been distinctly white, is now blue!

Below, you can see a photo of what the new blue additions look like.

It seems that some of the tower is continuing to remain white; however, even the clock’s base is blue. The new change presents quite a stark contrast from the rest of the interior facade, which is mostly white.

Now, we will need to see if the rest of the attraction changes as well, or if the blue on the clock tower is the only change the attraction is making.

Although the blue color does match the current changes that Fantasyland is undergoing to prepare for the 50th anniversary, it is much lighter than the royal blue color which we see on Cinderella Castle. Because of this, there is also a possibility that the change we see on the ride is separate from the anniversary, as well.

We will likely have to wait and see if any further changes are made to see how drastic of a turn the attraction’s look is taking!

What do you think of the blue clock tower that we see in the photo pictured above? Let us know your thoughts in the comments below.