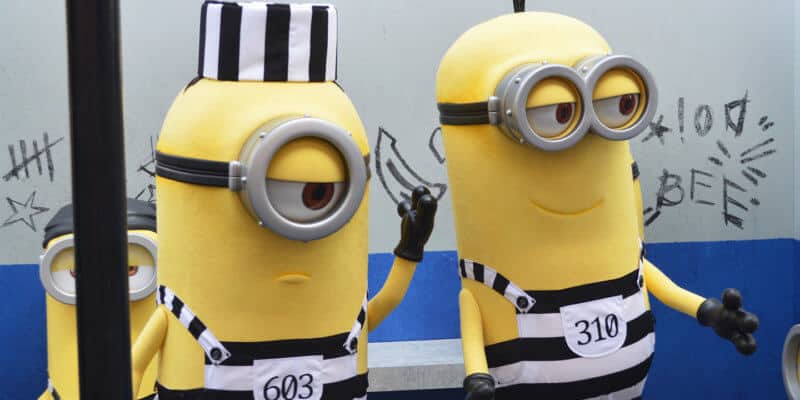 After numerous expansions and updates, some Universal Studios Park fans are wondering if there really is “too much of a good thing”.

Universal Studios is home to many beloved and iconic rides and attractions. These include The Amazing Adventures of Spider-Man, Revenge of the Mummy – The Ride, Transformers: The Ride 3d as well as the two newer additions to the Resort such as VelociCoaster and Hagrid’s Magical Creatures Motorbike Adventure.

For years, these experiences have allowed millions of Guests to get lost and immersed in a fun-filled world. However, some fans think Universal Studios may feature too many yellow, goggles-wearing “creatures”.

There’s no denying the cultural grasp the Despicable Me franchise has had since it started in 2010. Now, the Minions from the original movies have spawned their own franchise, which is arguably even more popular than the movie that introduced them.

Because of this, Guests can find many experiences based on these characters in the Universal suite of Parks and Resorts. One of these experiences is Despicable Me Minion Mayhem, which is described as follows:

Want To Be A Minion?

Join Gru, his daughters and the mischievous Minions on an unpredictable ride. You’re recruited for Gru’s latest scheme—one where you’ll become an actual Minion. But when things don’t go as planned, you’re launched into an unforgettable trip through his super villain laboratory. It’s heartwarming and humorous family fun for everyone.

While fun, some fans think there may be a surplus of minion content in the Parks. One Universal Orlando fan went to social media to get their opinion out in the open regarding this popular franchise. The post reads as follows:

So I know Everybody has a property that maybe they’re not the biggest fans off. If you’re not a minions fan, how do you feel about Universal going all in on changing the front of Universal To everything minions?

You already have the ride which I’m surprised it’s actually Lasted this long given how the last two iterations of that same building lasted at most 10 years each. You’re now possibly converting Shrek 4D into an attraction from the first minions movie and now you’re changing the universal monsters Café into the minions café from Hollywood.

The response to this post was energetic, to say the least. One user said, “The year is 2032: Universal Orlando has been renamed Minions Resort. All rides have been converted to Minions. All food is bananas.” Another user brought up the now-extinct Monsters Cafe, “I don’t mind minions, and replacing Shrek seemed like a logical move but closing down the Monsters Cafe which I consider as iconic as Mel’s Drive In is a step too far in my opinion.”

For those that may not know, the Minions are rumored to take over the now-closed Classic Monsters Cafe at Universal Orlando. This was a somewhat surprising move considering how much Minions are featured elsewhere, especially since the closed Shrek attraction is also rumored to be replaced with Minions.

Another user simply said, “Way too much minions”. The original post continues:

And I know you have Harry Potter in multiple areas and why I’m not a huge Harry Potter fan, at least they’re centralized within a theme. This is different than just using a property in multiple places without an overall theme

And I know some people love the minions but it still brings up the question: is it too much all in one area?

While Universal Studios does have a lot going on, with the construction for the Resort’s newest Park in full swing, some Guests may still find that Minions have too big of a presence in the Parks. Only time will tell how long this lasts, however.

Do you get sick of the Minions at Universal Studios?