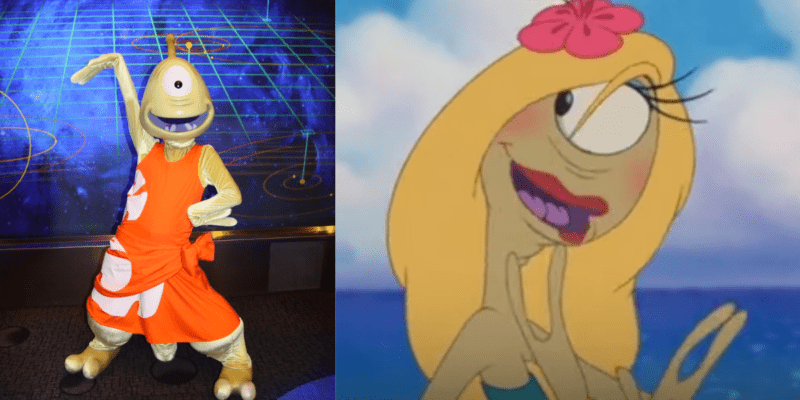 It’s always a treat to see a rare Disney character appearance at the Disney Parks! They commonly appear at special events, like Cast Member celebrations or runDisney races.

Last night, a few special characters appeared at Disneyland Paris for Magical Pride Day, an annual official Pride Celebration at the Disney Park. Characters were available for meet and greets, shows, and a special Pride parade!

One of those characters was Pleakley, the lovable green alien from Lilo & Stitch (2002). Pleakley brings something extra special to the Pride celebration — in the first Lilo & Stitch film, he and his alien counterpart Jumba Jookiba dress as a couple to avoid detection on the human island of Hawaii.

After the aliens are “sentenced” to life on Earth with Lilo, Stitch, and Nani, Jumba and Pleakley no longer have to hide their appearances around their new family. But Pleakley expresses that he enjoys dressing in women’s clothing and often goes out in drag in Lilo & Stitch: The Series and sequel films like Stitch! The Movie (2003), Lilo & Stitch 2: Stitch has a Glitch (2005), and Leroy & Stitch (2006).

Pleakley, though not confirmed to be a member of the LGBTQIA+ community, has become somewhat of an icon for LGBTQIA+ and gender-questioning Disney fans.

It’s exciting to see him appear at Disneyland Paris Magical Pride Day with his friends Lilo and Stitch!

Lilo & Stitch combines sci-fi with traditional Hawaiian culture for a heartwarming story about love and family. From Disney:

Would you like to see Pleakley or any other rare Disney characters at Disneyland Resort or Walt Disney World Resort? Let us know in the comments!