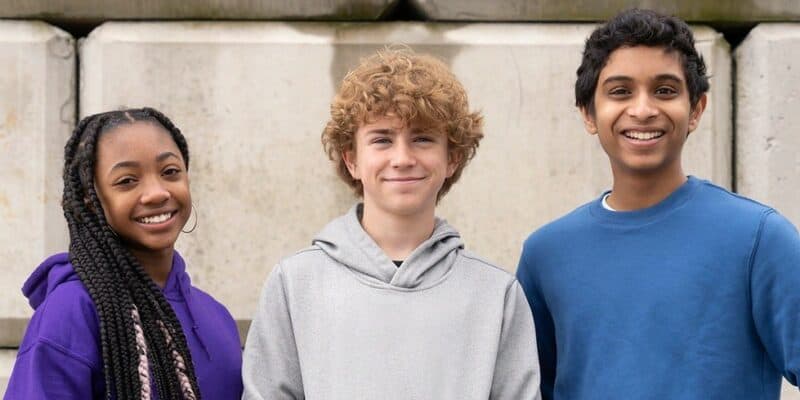 In the very near future, audiences will once again return to the world of the Olympians. From books to the big screen and now the small screen, Percy Jackson will invite old and new fans to Camp Half-Blood in a brand-new series from New York Times Bestselling author Rick Riordan.

Percy Jackson and the Olympians Series

What is the series based on?

The new television show based on the “Percy Jackson & the Olympians” middle-grade book series from author Rick Riordan is currently in development.

The popular book series began in 2005 with “The Lightning Thief”, followed by “Sea of Monsters” (2006), “The Titan’s Curse” (2007), “The Battle of the Labyrinth” (2008), and “The Last Olympian” (2009), which closed out the first series of the “Camp-Half Blood Chronicles”. “The Heroes of Olympus” and “The Trials of Apollo” series from Rick Riordan round out the Chronicles, each with its own five novels.

“The Lightning Thief” introduced readers to the world of the demigods and Camp Half-Blood, bringing young protagonist Percy Jackson from his New York home into a world of magical creatures, adventurous quests, and questionable gods. The “Camp Half-Blood Chronicles” are based on Greek mythology with gods such as Zeus, Poseidon, and Hades all appearing across the plethora of books.

Who is in the cast?

As a relatively new TV series, information has trickled in over the last few months. So far, audiences can expect to see Walker Scobell in the title role as the young Percy Jackson. Scobell gained recognition in Netflix’s The Adam Project (2022) as the younger version of Ryan Reynolds’ Adam Reed.

Leah Jeffries received backlash over the news of her casting, relating to the character in Riordan’s books not being depicted as Black. The author condemned the online racist attacks.

How was the series developed?

Riordan had no creative control over 20th Century Fox’s adaptations of his first two novels, but in 2019, the author pitched the television series to The Walt Disney Company, with the Mouse House announcing it was in the works in May 2020.

The first series will consist of eight episodes, with Riordan confirmed to be writing the pilot. James Bobin will direct the first episode of the series from showrunners Jonathan E. Steinberg and Dan Shotz. Principal photography began in June 2022 with pilot filming taking place in Vancouver, Canada. Riordan, along with his wife Becky Riordan, both have an executive producer credit for the Disney series. The Percy Jackson series is produced by 20th Television and Gotham Group.

When will the series be released on Disney+?

As of yet, Percy Jackson and the Olympians does not have a set release date. With principal photography only just beginning, it can be expected to debut in 2023 at the earliest.

Is Percy Jackson and the Olympians related to the movies?

The new Percy Jackson series coming to Disney+ will not be related to the movies of the same name, instead, the television show will act as a reboot of the failed film franchise. Releasing amid the boom of movie adaptations from middle-grade and young adult novels like JK Rowling’s “Harry Potter” series, Suzanne Collins’s “The Hunger Games”, James Dashner’s “The Maze Runner”, and Veronica Roth’s “Divergent”, Percy Jackson & the Olympians was a box office bomb, with both films netting the studio just $400 million combined.

Similar to how each of the two movies released followed the sequence of the novels of which they were inspired, the television live-action series will tackle one book per season. The first will adapt “The Lightning Thief”, the first novel in the Percy Jackson book series.

Will Logan Lerman or Alexandra Daddario appear in the series?

As the series is a reboot and not a sequel to the movies, it can be anticipated that Logan Lerman and Alexandra Daddario will not appear in the Disney+ series. However, there is a possibility that either of the actors could cameo in the television adaptation as a different character. In fact, when the series was first announced, Percy Jackson fans demanded that Lerman star in the TV show.

What other books has Rick Riordan written?

In addition to the “Camp Half-Blood Chronicles”, Riordan has written “The Kane Chronicles” and the “Magnus Chase and the Gods of Asgard” series. Alongside his popular novels, Riordan has also written supplementary material like “The Demigod Files” (2009) and “Percy Jackson’s Greek Gods” (2014). He has also authored graphic novel versions of his popular novels based on Greek myths.

Outside of his mythological world, Riordan has also written books in the “39 Clues” series, as well as the “Tres Nevarre” series, which features Riordan’s first published book, “Big Red Tequila” (1997).

Are you looking forward to entering the world of Percy Jackson on Disney+? Let us know in the comments down below!