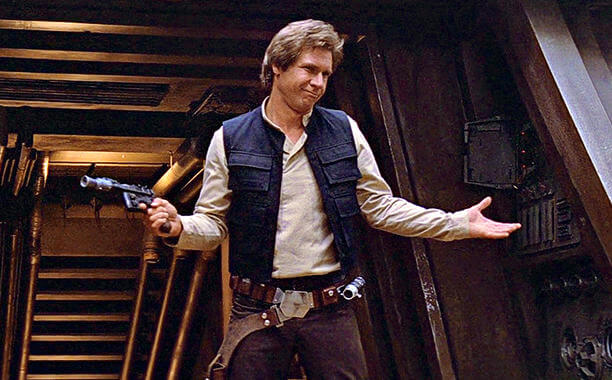 With “Star Wars: The Force Awakens” continuing its path to become the highest grossing movie of all time, many fans have already started to look forward to the bright future of the property. With five more films already receiving release dates in the future, and many of them already in development, eyes have focused on “Rogue One” and “Episode 8” already. Yet one film, directed by the Phil Lord and Chris Miller (“21 Jump Street”, “Lego Movie”) could be the riskiest bet in Lucasfilms’ upcoming schedule. Their film will feature the origins of Han Solo, and while the role may be coveted by many, it also carries substantial risk.

With news relatively scarce on the film up until this point, the release of a shortlist of the actors being considered is relatively surprising. As Andy Greenwald of “The Watch” podcast put it, “every male human between the ages of 20 and 35 is auditioning” to take up the mantle of Han Solo. Variety was able to reveal the shortlist, and it sounds like Mr. Greenwald was certainly on the money.

The shortlist in question has eight actors on it, including: Miles Teller (“Fantastic Four”), Ansel Elgort (“The Fault in Our Stars”), Dave Franco (“21 Jump Street”), Jack Reynor (“Transformers: Age of Extinction”), Scott Eastwood (“Suicide Squad”), Logan Lerman (“The Perks of Being a Wallflower”), Emory Cohen (“Brooklyn”) and Blake Jenner (“Glee”). The list is certainly long for a shortlist, and has many of today’s biggest stars on it. Let’s break down the options.

First of all, Miles Teller, Dave Franco, Ansel Elgort, and Logan Lerman have all had a shot at franchise movie making with both successes and failures. Teller and Elgort are both part of the “Divergent” franchise, while Franco was in both “21 Jump Street,” “Neighbors,” and “Now You See Me” (all of which have sequels on the way). Lerman also headlined the “Percy Jackson” franchise, and was on the shortlist for “Spider-man” under Marvel.

However, none of the four really embody what it means to be Han Solo, or really haven’t had the opportunity yet in their films. The disastrous “Fantastic Four” and negative press that followed Teller would likely make him a hard choice to put in the role. He’s always had the swagger, anyone who has seen “Whiplash” could attest to  that. I just don’t know if Disney wants to bring his baggage to the franchise. Elgort has the charisma factor too, but I just don’t see it. It might just be his role selection over the past few years, but I struggle to seem him as the galaxy’s best smuggler.

I’d say Franco and Lerman would have the inside track, especially because they seem like they could handle the comedy aspect and quick wit better than Teller or Elgort. Slight edge to Lerman, because they almost trusted him with Spider-man, who is arguably the closest equivalent to Solo in the MCU.

The other four do offer a something a little more unique than the other actors. Reynor has been in a big blockbuster, but was certainly not the focus (it’s hard to be when Mark Wahlberg and giant robots are the leads in your film). Blake Jenner’s biggest role before this would be on “Glee” but the show was also winding down so the focus was not necessarily on him. I can’t say I watched his episodes (I stopped watching a few years before) but from what I understand he was solid.

Scott Eastwood certainly looks a lot like his father, the film legend Clint Eastwood, and could bring that charisma to the screen. They have not confirmed who Eastwood is playing yet in the “Suicide Squad” film, but if Heroic Hollywood is to be believed, chances are that he’s playing Slade Wilson, a.k.a. “Deathstroke.” That’s a big role for the future of the DC films, so he must have inherited some of Dad’s charisma. However, I find it difficult to believe that the same person who takes on Deathstroke should play Solo. They are kind of opposites on the spectrum to me.

Of the names listed here, the one that had me most intrigued was Emory Cohen. He is phenomenal in “Brooklyn” and the film really does show off a physical presence in “The Place Beyond the Pines.” He may be the most left field choice, and could really benefit from the role. He’s solid and may be the best case among the relatively unknowns looking to get the role.

All this said, each actor would bring their own strengths and weaknesses to the role in question. While I personally think that Cohen, Franco, and Lerman are the best choices that could be made, it still feels like the role is simply too big for anyone to grab right now. Frankly, what made Daisy Ridley and John Boyega so amazing was that they were so far from the spotlight, nobody knew who they were when they were cast. Perhaps Disney should think about doing the same with Solo, because the franchise will bring people into the door and star power really does not mattter here. While I love the idea of a Han Solo origin film, I’m not entirely sure we need one. The role could make or break the career of the actor who is playing Solo, and its hard to forget what happened to Shia LaBeouf’s career post-Indiana Jones.  Time will tell but it should be a fun ride in the meantime.