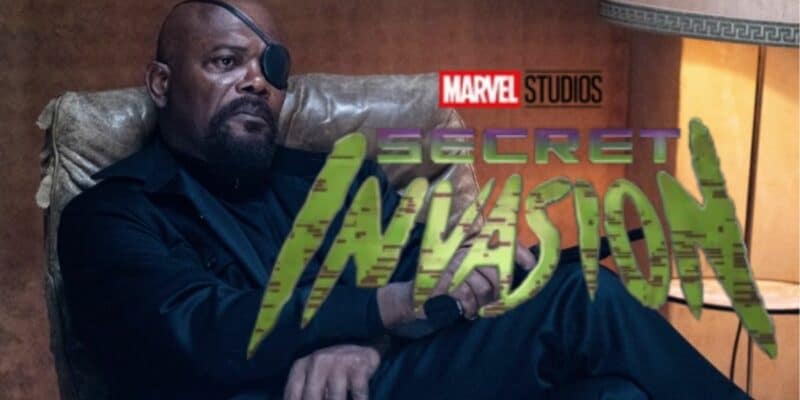 Samuel L. Jackson is set to return as former-SHIELD director Nick Fury in Secret Invasion with Captain Marvel (2018) costar Ben Mendelson (Talos) sometime later this year. But now rumors suggest it could be delayed following extensive reshoots and the Ukraine Invasion could be the unlikely culprit.

It has been a while since fans have seen Samuel L. Jackson’s Nick Fury, back in Spider-Man Far From Home (2019) in a post-credits scene. Tom Holland’s Peter Parker/Spider-Man believed he was working with Fury, but it was really the shapeshifting Skull, Talos impersonating Fury.

Secret Invasion will also include Maria Hill (Cobie Smulders), Kinglsey Ben-Adir, Olivia Coleman, and Emilia Clarke. The show is rumored to focus on Fury handling a Skrull invasion on Earth. Not many details are known about the story but the show is currently filming and leaked images of the sets have surfaced online. One major scene that was leaked clearly took place in Russia and featured signs hung around to celebrate “National Unity Day.”

Related: Marve’s HUGE Mistake is “Disrespectful” and “Offensive” to Fans

Entertainment reporter Daniel Richtman shared on his Patreon that Secret Invasion is set to have four months of reshoots starting in two weeks (mid-July). Recently, Samuel L. Jackson shared that he is on the set of The Marvels with Brie Larson (Carol Danvers/Captain Marvel), Iman Vellani (Kamala Khan/Ms. Marvel), and Teyonah Parris (Monica Rambeau from WandaVision).

While it is perfectly normal for any television show or Marvel movie to undergo reshoots, four months does seem extensive when the star is ready to move on to his next project. It has been rumored Marvel Studios could be removing the Russian scenes because of the ongoing war involving Russia and Ukraine.

Marvel Studios and Disney have halted the release of all films in Russia following the Invasion in support of  President Volodymyr Zelenskyy, Ukrainian troops, and civilians who formed a strong resistance against Vladimir Putin’s forces who attacked Ukraine back in February.

Are you getting impatient over possible delays in the release of Secret Invasion? Let us know in the comments.