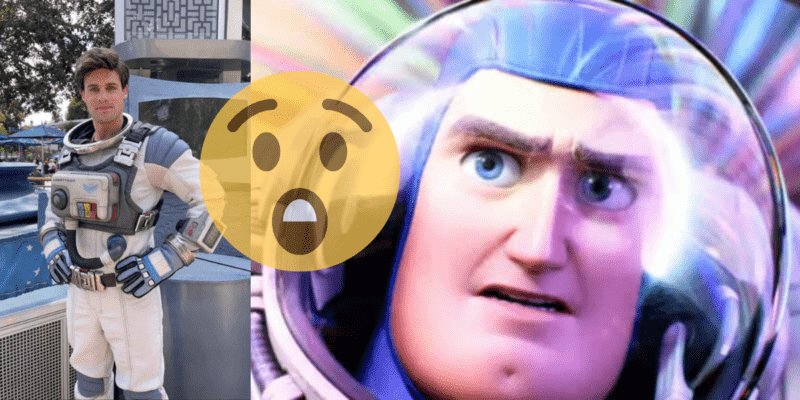 The galactic hero landed in Tomorrowland at Disneyland Resort on June 17 to coincide with the film’s release. Some fans speculate that Disneyland Park’s Space Mountain will be rethemed to Lightyear!

Fan reactions to the character’s appearance were mixed, with some fans frustrated that Lightyear immediately got representation at Disneyland Park and others comparing Buzz Lightyear’s features to that of a Ken doll.

The official Disney Parks TikTok account shared a video of the space ranger saying, “To infinity and beyond!” However, eagle-eyed fans will notice that the TikTok has been removed.

Related: Chris Evans Says Same-Sex Kiss in ‘Lightyear’ Should Be “The Norm”

A Disney Parks fan, @adventureanalisa on TikTok, posted a video speculating that she and other fans got the Buzz Lightyear TikTok removed:

“I’m pretty sure we single-handedly made the Disney Parks TikTok take down their Buzz Lightyear video,” she says in her TikTok.

According to Analisa, fans were inappropriately and flirtatiously directing comments at the Disneyland entertainment Cast Member portraying Buzz Lightyear.

“The comments were simping so hard, it’s gone,” she exclaims.

The Disney Parks account hasn’t posted an updated Lightyear TikTok or explained why they chose to delete the video.

Have you met Buzz Lightyear at Disneyland? Let us know in the comments!