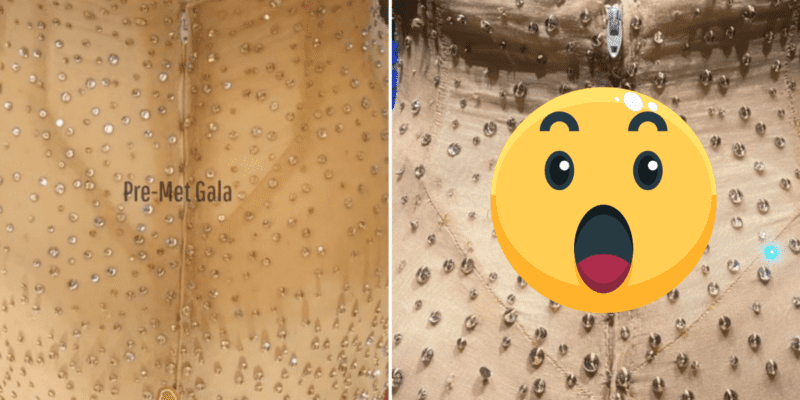 The dress was custom sewn to Monroe’s body in 1962, initially sketched by Bob Mackie and designed by Jean-Louis. It was groundbreaking when Monroe wore the dress – it was rare to wear sheer fabrics at the time.

Fox Studios had explicitly prevented Monroe from wearing anything too revealing in films due to a previous nude calendar scandal. This was Monroe’s chance to fight back against the executives and studios that had controlled her for so long.

“Marilyn looked amazing and accomplished exactly what she intended to,” Mackie told Variety. “And she didn’t really care, because she had already been fired. Her figure was at its peak, the dress was a classic shape of fashion at the time.”

In a YouTube video compiled by not.bw, you can hear the audience gasp and woo at Monroe as she pulls off her fur coat to reveal the shimmering dress before she sings to President John F. Kennedy.

Kardashian tried on a replica of the iconic dress, which Ripley’s Believe it or Not Museum now owns, before being permitted to borrow it for the Met Gala.

The dress is typically stored in a cool, dark room at 68 degrees and 40-50% humidity to preserve the fragile, historic fabric. Kardashian lost 16 pounds in three weeks to fit the $4.8 million dress, drawing controversy for setting unhealthy and unrealistic weight-loss expectations.

After red carpet photos, Kardashian changed back into the replica inside the Met Gala with date Pete Davidson. But, according to photos shared by @PopCrave on Twitter this week, the damage had been done:

Marilyn Monroe’s iconic dress has reportedly been damaged after being worn by Kim Kardashian at the Met Gala. The dress now shows signs of tearing, and several crystals are either missing or hanging off of it.

Marilyn Monroe’s iconic dress has reportedly been damaged after being worn by Kim Kardashian at the Met Gala.

The dress now shows signs of tearing, and several crystals are either missing or hanging off of it. pic.twitter.com/cFu1lUBmzS

The Marilyn Monroe Collection photos show the dress before and after the Met Gala. In the after photo, you can see that the dress’s fabric is stretched, with tiny holes forming near the zipper, and some crystals are missing.

Kim Kardashian and Ripley’s Believe it or Not Museum haven’t publicly commented on the before-and-after photos. In May, Kardashian told Vogue that she would never intentionally damage or disrespect the dress:

“I’m extremely respectful to the dress and what it means to American history. I would never want to sit in it or eat in it or have any risk of any damage to it, and I won’t be wearing the kind of body makeup I usually do. Everything had to be specifically timed and I had to practice walking up the stairs.”

The reality star drew controversy for wearing the historical dress, which Monroe intended to fit exactly to her figure and never be re-worn. Additionally, Ripley’s gave Kardashian a lock of the late star’s hair, gathering criticism for further exploiting a woman who spent most of her life under fierce control. One historian said the hair appears fake.

Ripley’s shared a video of Kardashian trying on Monroe’s dress on Instagram, writing that no alterations were made to the dress and that “great care was taken” to protect it:

Great care was taken to preserve this piece of pop culture history. With input from garment conservationists, appraisers, and archivists, the garment’s condition was top priority. Believe It or Not! no alterations were to be made to the dress and Kim even changed into a replica after the red carpet!⁠

⁠Do you think it was appropriate for Kim Kardashian to wear Marilyn Monroe’s dress to the Met Gala?