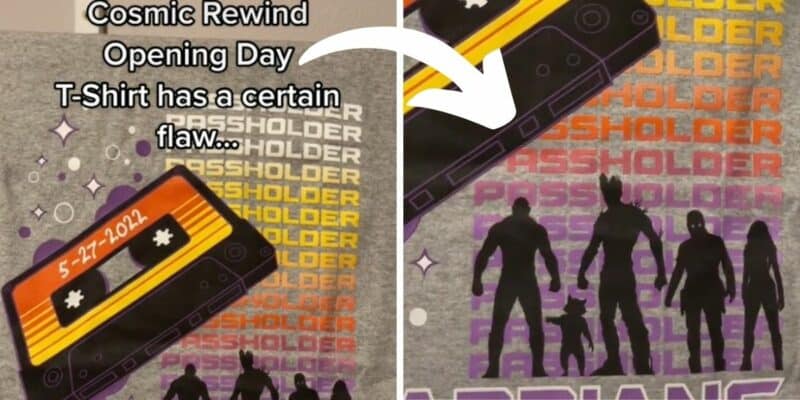 Guardians of the Galaxy: Cosmic Rewind officially opened to Guests at EPCOT over Memorial Day weekend and the demand has been extremely high. Virtual Queue spots have been filling up within seconds as Disney and Marvel fans are eager to experience the one-of-a-kind coaster.

Disney Park Blog describes the innovative technology for this new attraction as:

To celebrate the opening of Guardians of the Galaxy: Cosmic Rewind, Disney released a special t-shirt, which is getting a bit of backlash from fans over an editing mistake.

If you are confused as to what exactly is wrong with the t-shirt, look closely underneath the mix tape. The shirt reads “Passholder” over and over again, with the mixtape laid overtop, blocking part of the word. Towards the bottom, the mixtap blocks just one “P”, leaving just “assholder” visible.

You can see it more clearly in the photo below.

Many fans are finding this hilarious, whereas others feel as though Disney should have checked their work better considering Disney is a family-friendly Park, plus children may want to wear this shirt. TikTok user, David C., commented on the video:

Some say error. Some say accurate.

That certainly was not an accident

We do want to note that Guardians of the Galaxy: Cosmic Rewind does not offer a StandyBy queue. The new roller coster is currently utilizing a virtual queue system, similar to when Star Wars: Rise of the Resistance at Disney’s Hollywood Studios and Remy’s Ratatouille Adventure at EPCOT opened.

Did you notice this mistake on the Guardians of the Galaxy: Cosmic Rewind Annual Passholder t-shirt? Let us know in the comments below.