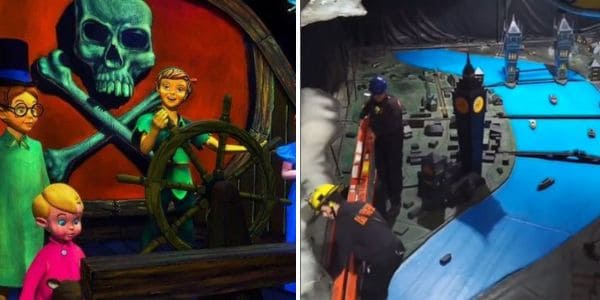 In a funny video shared online through social media, Cast Members could be seen carrying ladders in order to help rescue Guests.

However, sometimes rides break down and experience technical difficulties. This is usually due to how complex or new an attraction is, which is why we see a lot of issues at Rise of the Resistance in Star Wars: Galaxy’s Ede in both Walt Disney World and Disneyland.

Frozen Ever After in EPCOT also has been plagued with problems since opening, with both visual and technical issues putting the ride to a halt for Guests. The new Guardians of the Galaxy: Cosmic Rewind at EPCOT has proven to be difficult to maintain as well.

However, sometimes a ride can break down because of how old it is and at Walt Disney World, there are quite a few “ancient” attractions.

Related: Guests Irate as They Are “Escorted Off” Struggling ‘Guardians’ Ride

One of the most legendary rides in all of the Disney Parks has to be Peter Pan’s Flight. The ride is a classic in every sense of the word and takes the Guests on a journey through the iconic Disney animated film. Even though the ride is old, it still manages to entertain Guests as they travel through the sky on this dark ride adventure.

Unfortunately, the ride sometimes experiences difficulties due to its age and overall popularity and because of the unique way the attraction works, the evacuation procedure is quite different than rides like Space Mountain or Haunted Mansion.

This was shown in a video shared on TikTok by @muggle.on.main.street which you can check out below:

Getting stuck on Peter Pan’s Flight was a new experience 🙃. The fire department was kind enough to help us down with a ladder. Come follow me for more Disney fun! #disney #disneyworld #magickingdom#peterpansflight #peterpan #stuck #disneyrides #therideisbroken#firemen #ladder #omg #getmedown

Getting stuck on Peter Pan’s Flight was a new experience 🙃. The fire department was kind enough to help us down with a ladder. Come follow me for more Disney fun! #disney #disneyworld #magickingdom #peterpansflight #peterpan #stuck #disneyrides #therideisbroken #firemen #ladder #omg #getmedown

For those who haven’t experienced it, Disney describes Peter Pan’s Flight as follows:

Can Peter Pan defeat the dastardly Captain Hook and return his young companions safely to London? Or will someone meet an untimely end… in the jaws of a ey ticking crocodile?

What Disney ride have you been evacuated off of?