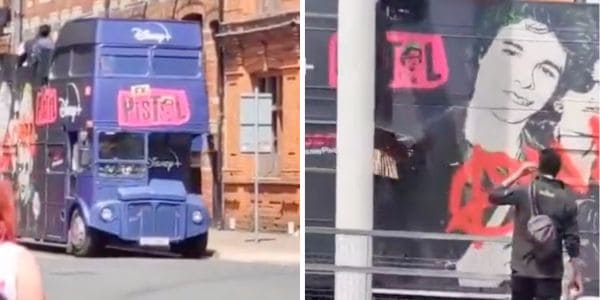 The vastness of the Disney+ catalog is daunting and intimidating, to say the least. The sheer amount of Star Wars and Marvel content, as well as classic Disney animated movies and new docuseries, can be overwhelming, providing users a bang for their buck.

It seems like new shows and movies are announced every week, with something exciting always on the horizon. Recently, we got our first look at the upcoming live-action Pinocchio.

First announced as part of Disney Investor Day in December 2020, the live-action Pinocchio is said to follow along closely with the storyline for the 1940 Walt Disney Animation Studios classic, Pinocchio.

Speaking of Disney+, an incident recently occurred featuring a bus advertising for Disney+. See the video below shared by Michael M (@michaelmphysics):

I find this very funny

I find this very funny pic.twitter.com/RC2XIuBKnf

As you can see, a bus advertising Disney+ can be seen struggling to drive around. This specific bus was promoting the new Pistol show on FX, which is streaming on Hulu. the series is streaming on Disney+ in countries outside of the U.S. which is why this show was advertised alongside the streaming service on the bus.

By the looks of the road and cars, it appears this incident happened in the United Kingdom, which makes sense as the infamous Sex Pistols, on which the show is based, originated in London.

Disney+ is the dedicated streaming home for movies and shows from Disney, Pixar, Marvel, Star Wars, and National Geographic, as well as the new general entertainment content brand in select International markets, Star. As part of Disney’s Media & Entertainment Distribution segment, Disney+ is available on most internet-connected devices and offers commercial-free programming with a variety of original feature-length films, documentaries, live-action and animated series, and short-form content.

Alongside unprecedented access to Disney’s incredible library of film and television entertainment, the service is also the exclusive streaming home for the latest releases from The Walt Disney Studios. Disney+ is available as a standalone streaming service or as part of The Disney Bundle that gives subscribers access to Disney+, Hulu, and ESPN+. For more, visit disneyplus.com, or find the Disney+ app on most mobile and connected TV devices.

Do you have Disney+?