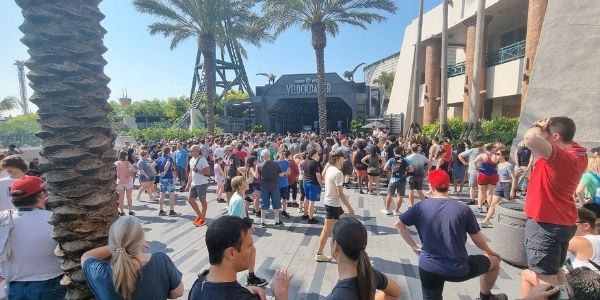 Guests hoping to experience Universal’s most-intense ride were in for a rude awakening.

Related: Universal Confirms Another Beloved Offering Will Shut Down Permanently

The Universal Studios Resort in Orlando, Florida has so many great rides and attractions for Guests to experience. The Park has something for everyone to enjoy, ranging from intense thrill rides to more laid-back family attractions.

Universal’s newest attraction is the intense VelocicCoaster which is themed to the Jurassic World franchise starring Chris Pratt and Bryce Dallas Howard. Since it opened, the ride has been a smash hit among Universal Guests and roller coaster enthusiasts alike.

The ride drops Guests over 100 feet going up to 70 miles per hour. The reception to this attraction has been incredibly positive, with many claiming it’s the Resort’s best ride only behind Hagrid’s Magical Creatures Motorbike Adventure.

Unfortunately, the ride seems to have had some trouble today with Guests fleeing the attraction. This can be seen in a tweet shared by Tommy Hawkins (@tommyhawkins):

Fire Alarm caused instant evac of entire #velocicoaster building, not a fan of single knock fire alarms. Double knock buys time to identify cause without a stampede of people panicking

As you can see, hundreds of Guests left the ride after the fire alarm caused an evacuation. At this time, we are unsure what caused the fire alarm to go off but hope all the issues are resolved and Guests are able to experience this ride later today.

Universal Orlando Resort is home to many thrilling attractions. You can experience Hogsmeade, which includes Harry Potter and the Fobidden Journey, Hagrid’s Magical Creature Motorbike Adventure, and The Flight of the Hippogriff, as well as Jurassic Park River Adventure, Skull Island: Reign of Kong, The Amazing Adventures of Spider-Man, The Incredible Hulk Coaster and much more at Universal’s Islands of Adventure.

Then, don’t forget about all the amazing attractions like Despicable Me: Minion Mayhem, The Simpson’s Ride, E.T. Adventure Ride, Harry Potter and the Escape from Gringott’s, MEN IN BLACK: Alien Attack, Hollywood Rip It, Ride It, RockIt, and much more all next door at Universal Studios Florida.

Have you been able to experience VelociCoaster yet?