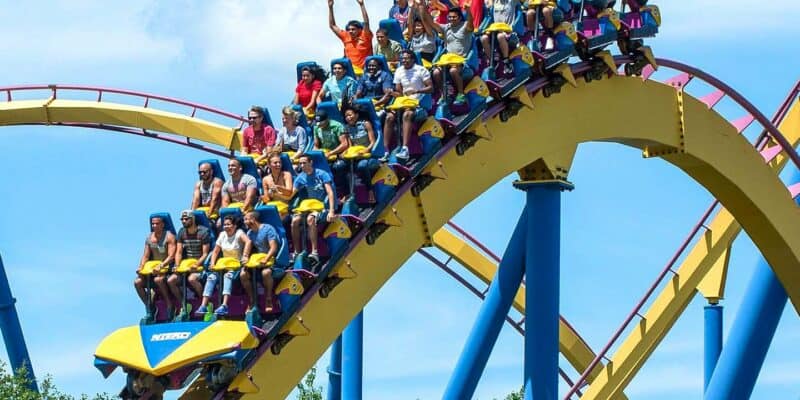 Some Guests are worried about the safety of a Six Flags ride after noticing the track came super close to a sign.

Millions of Guests visit the collection of Six Flags parks every year, as each one offers some truly thrilling and terrifying attractions.

Six Flags Great Adventure is located in New Jersey and offers some amazing rides and attractions that range from fun to terrifying. Featuring rides like BATMAN The Ride, BIZARRO, and the Jersey Devil Coaster, Guests visiting Six Flags Great Adventure are in no short supply of thrilling experiences. The Park also hosts the jaw-dropping Kingda Ka coaster which opened as the world’s tallest and fastest roller coaster.

Some Six Flags fans are now worried that there is a possibility of injury on one of the more intense rides. See the post below shared by u/BIGSlil:

The white board on the entry sign of [Medusa, Six Flags Great Adventure] messed up the clearance and now if you sit in a left outside seat you can hit it with your hand.

The white board on the entry sign of [Medusa, Six Flags Great Adventure] messed up the clearance and now if you sit in a left outside seat you can hit it with your hand. from rollercoasters

As you can see, the white board sits awfully close to the roller coaster tracks, putting Guests close enough to reach out and touch it. Users responded to this image in many different ways, with some being shocked that this could even be built. One user said, “That sounds like a great way to break an arm.” Another said, “I smell a lawsuit coming.” One user pointed out how dangerous this could actually be, “Yea they really need to be careful with stuff like this. People could get really hurt.”

While no one has been seriously injured by this oversight, the Guest says that it’s quite easy to touch and they themselves were able to place their fingers on it as they were riding.

The original top-rail, floorless roller coaster returns to Six Flags Great Adventure. Do you have what it takes to survive the return of Medusa?

Journey back in time to the Great Frontier and experience the rise and fall of Exile Canyon. Life in this unforgiving, Gold Rush-era outpost was so grueling, and the conditions so insurmountable, it earned the nickname “Medusa.” Flipping you seven times across 3,985 feet of track, you’ll brave scorching fire, chilling mist and speeds of approximately 60 miles per hour as you attempt to escape the wrath of the mythical Gorgon, Medusa!

The Six Flags brand operates 27 total theme parks which can be found in the United States, Canada, and Mexico. Six Flags Great Adventure is located in New Jersey. In California, Six Flags Magic Mountain has recently implemented a few changes. The theme park is adding a new Flash Pass, which is a pay-per-ride system that will cause Guests to pay an extra fee on top of the ticket price in order to skip the line for certain attractions.

Have you been to Six Flags?