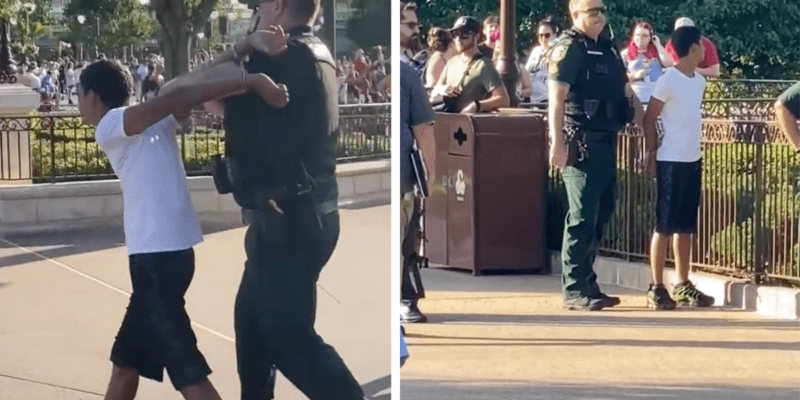 A magical day at Walt Disney World Resort turned into a shock for many Disney Park Guests as they witnessed something they certainly weren’t expecting.

There’s so much to see and do while visiting the Disney Parks. From riding iconic attractions to enjoying world-class entertainment shows to experiencing character meet and greets, there’s something for everything when visiting Magic Kingdom, Disney’s Animal Kingdom, Disney’s Hollywood Studios, and EPCOT.

While enjoying the Disney Adventure Friends Cavalcade at Magic Kingdom recently, Disney Park Guests were surprised to see police making an arrest right in the middle of the parade.

TikTok user @nataliecurling shared the video, which can be seen below:

As you can see in the video, the Disney Park Guest is detained and Disney security surrounds the area as he is held. It’s unclear what happened to cause the arrest. The video was shared yesterday and the users say the incident happened around 6:30 p.m. on Monday.

The users posted a follow-up video explaining that they weren’t sure the age of the person detained, but it looked as if he was a young teenager. In addition, the users noted that the Guest in question was with an older man, who presumably was his father, who was also arrested. Security ordered Cast Members to form a barricade and the Guests. were escorted out of the Park. At this time, it’s still unclear what exactly unfolded.

This isn’t the first time that a Guest has been arrested while at the Disney Parks. Disney was sued after an alleged wrongful arrest of a great-grandmother in possession of CBD oil in 2019. While these did not happen in the Parks, four Walt Disney World employees were arrested in an undercover human trafficking sting back in March.

Have you ever witnessed anything like this at the Disney Parks? Let us know in the comments!