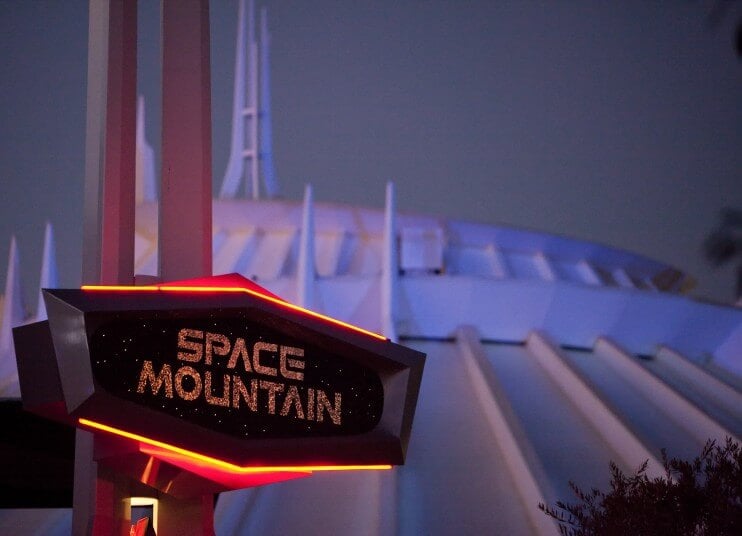 One of the best things about the Disneyland After Dark: Stars Wars Nite is the changeover that occurs on Space Mountain at Disneyland Park.

Space Mountain is a thrill coaster located in Tomorrowland, and allows Guests to ride through space at high speeds while being tossed back and forth through swift turns that primarily take place in the dark with minimal lighting. To enhance the attraction, much like Disneyland overlaying the Haunted Mansion with The Nightmare Before Christmas, Space Mountain turns into Hyperspace Mountain with a Star Wars flair!

. Taking place on May 3, May 4, and May 27, Star Wars Nite will be the ultimate Star Wars extravaganza, packed with galactic fun, including an amazing pyrotechnical spectacle that will illuminate the skies with a Star Wars-themed fireworks show, March of the First Order, featuring Captain Phasma and her elite unit of Stormtroopers, A Galactic dance party, Sightings of various Star Wars characters throughout the evening, Star Wars-themed attractions, usually with shorter wait times, Star Wars-themed eats and treats, merchandise, photo opportunities, and much more!

Now, Guests are noticing some changes withing Hyperspace Mountain. One Guest rode the attraction and stated:

I think Hyperspace Mountain has improved!

Rode it yesterday & I was much more impressed with it than the last few times it was running. For once the blacks in the background on the projections/screens were right so you were surprised by the “other ships” flying by instead of staring at a square lit up & then see the ships.

I still prefer the original, but it finally felt like a legit overlay that was worth being there.

Others seemed to have been in total agreement. One Guest said, “Agreed! The darkness is much better. The storyline is great. Feels like you’re really fighting in that Star Wars battle. Absolutely love it.” Another noted, “The Nightmare Before Christmas overlay for HM has been improved over the years so this doesn’t surprise me if they’ve done some changes to make Hyperspace Mountain better as well.”

At the moment, it seems that the attraction will stay rethemed through to June 27, as that is how far the calendar will show at this point in time.

Rocket Right onto the Battlefield
Fend off crossfire from swarms of Rebel X-wing starfighters and Imperial TIE fighters amidst an intergalactic onslaught!

Have you noticed any changes when it comes to Hyperspace Mountain?