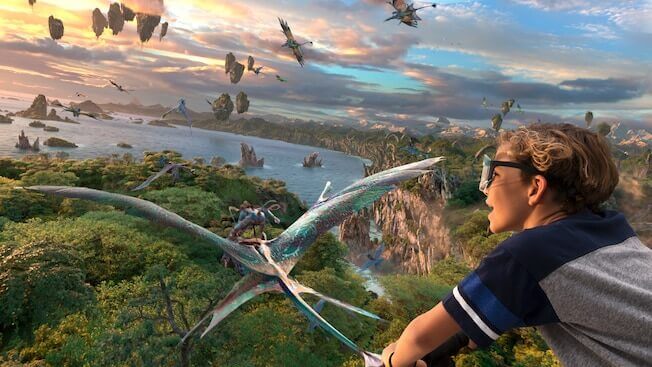 One of the most popular attractions at Walt Disney World Resort is Flight of Passage, located in Pandora in Animal Kingdom. The attraction opened in 2017 to incredible wait times of 4+ hours, and still, years later, we can expect that during busy times of the year, wait times will climb to those large waits once again. Typically, the ride had around a two-hour wait, which is still pretty long for many!

The attraction is a flight simulator that allows us, Guests of Animal Kingdom, to hop on the back of a banshee by linking to someone who is Na’vi. Through this, we are able to deeply explore Pandora, the world of Avatar, through sights, scents, and movement. We recently reported on some Guests complaining about the state of the attraction, and now, those worries continue to grow.

It seems that riders are starting to notice blurriness and double vision when riding.

Flight of passage blurriness/double vision. I wonder if anyone else has experienced this? I hadn’t ridden in over a year, but Flight has always been one of the more convincing experiences at WDW (with the exclusion of my ride last night, in which these problems were distracting). Maybe something with the glasses or how I was wearing them?

Flight of Passage utilizes 3-D glasses, but this should not make the attraction’s video footage look distorted in any way, as this Guest is noting that they experienced. It seems other Guests have also experienced similar issues in sections of the ride. One Guest replied stating, “I’ve had similar issues this pastime, but mostly just on the part where it’s in the dark cavern.” Another noted, “It’s the same for me, but it comes into focus as more of the bioluminescence comes on screen in the cave scene.”

The responses of Guests also experiencing this blurry, double vision sensation only continued to grow as the conversation carried on. Some noted that this may just be an issue with one theater, but not all, however, we cannot be sure what the issue is here, if there indeed is something broken with the attraction. One Guest noticed that the seat in which they were given made a huge difference in terms of ride quality, “I rode it twice recently. First time I was on the left side (spots 9-16), 2nd to last spot. Perfect. 2nd time I was on the right side (section for spots 1-8). Spot 1. Horrible double vision for most of the ride.”

Another rider commented in agreement but also hopes that Disney is able to correct the issues as the blurry vision increases motion sickness when riding.

Glad it wasn’t just me! It was definitely amazing when it first opened but I’ve noticed it getting progressively blurrier. I thought it was just the location of where I was sitting but it looks like there are some mechanical wear and tear issues. I hope they fix it up though because I was getting more motion sickness due to it being blurry.

During recent rides, we can attest that there are certain sections that seem to have lost their crispness. Considering Flight of Passage is a separately ticketed Lightning Lane pass, and does not come with the typical Disney Genie+ options, many Guests expect the attraction to ride without flaw. And now, with Avatar: The Way of Water debuting its first trailer, we will likely see a new resurgence in the James Cameron-created franchise.

Amazing Aerial Adventures Await
Board your own mountain banshee and embark on a thrilling expedition, where interstellar explorers like you get an up-close look at this moon’s incredible landscape.

Have you noticed any issues on Flight of Passage as of late?