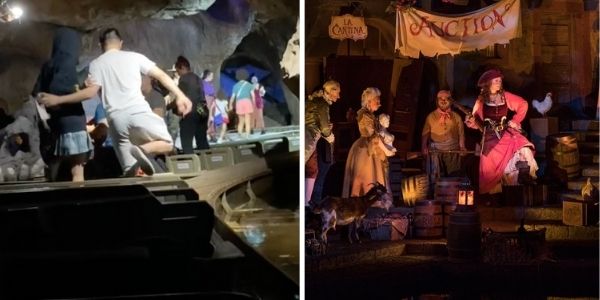 During a fairly normal Disney World ride malfunction, Guests had to use their parkour skills to make their way off the attraction.

Related: Fan-Favorite Disney Characters Return After Being Cut From Attraction

When a ride breaks down or undergoes a maintenance issue that Disney cannot fix while Guests are aboard, they must remove all Guests in order to safely and successfully maintain the attraction. Some attractions are easier to evacuate than others, depending on the ride vehicle in question.

Well, whether they liked it or not, some Disney World Guests had to evacuate off of Disney’s incredibly-popular Pirates of the Caribbean attraction in the Magic Kingdom. The video was shared on TikTok by @itsnotwolverine which you can see below:

Over an hour and then had to climb from boat to boat to get out…It was quite the adventure.

Reply to @waltdisneyworldparks Over an hour and then had to climb from boat to boat to get out…It was quite the adventure. 🙃😂 #wdw #disney #justdisneythings #piratesofthecaribbean

As you can see in the video shared above, Guests had to hop from one boat to another in order to make it out of the shut-down attraction. In the comment section, Guests claimed that firefighters, along with other Cast Members assisted them in getting off the attraction.

Typically, when an occurrence such as this happens, Guests are given a FastPass or multiple experience pass so that they can ride another attraction while skipping a majority of the wait since their ride experience was interrupted. This ensures Guests are still able to have a magical experience, even if things do not go as planned!

DIsney World’s official description of Pirates of the Caribbean:

Have you ever had to do something like this at Disney?