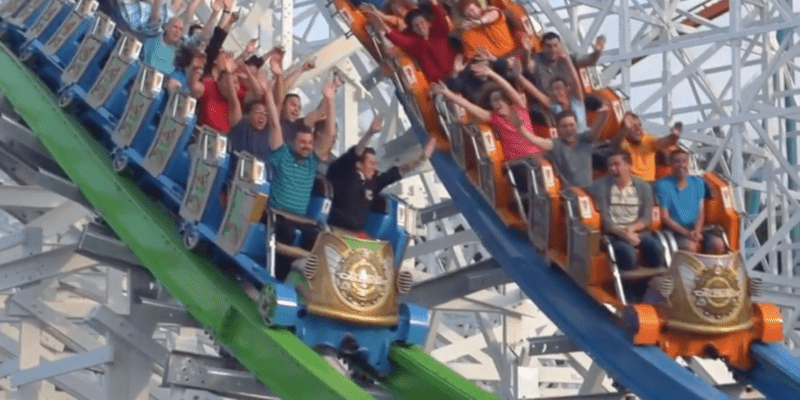 Each year, thrill lovers make their way to their favorite theme parks to enjoy epic attractions at places like Walt Disney World Resort, Universal Orlando, Universal Studios Hollywood, SeaWorld, Busch Gardens, Six Flags, and many more but few expect to see a wild animal on the loose, especially one that is potentially very dangerous. Well, this is exactly what happened recently at a popular theme park destination in California.

What sounds like a plot to a movie actually happened last weekend. According to ABC News Channel 7, a bear actually freely roamed the perimeter of Six Flags Magic Mountain in Valencia, California.

The story was officially recounted by the Los Angeles County Fire Department, explaining that a bear was loose on Six Flags Magic Mountain property. The California Department of Fish and Wildlife and animal control services to free the bear with the rescue taking several hours.

The bear was found near the backlot of the Park stuck between two trailers. The county fire department said crews sedated the bear and moved one of the trailers for better access. Fortunately, the animal was then safely relocated into the wild.

Thankfully this story had a happy ending and no human (or bear) was hurt in the process. This is certainly not what you expect to happen at a theme Park but we guess events like this are a good reminder to be prepared for anything and everything.

From coaster favorites like Twisted Colossus to pint-sized thrills like Canyon Blaster, there’s excitement for every family member! Find your thrill at the undisputed Thrill Capital of the World.

Much like Disney Genie, Guests can book the passes on their phones and should arrive at the attraction when their return time has come. Considering the cost can rise to $25.00 per person per ride, Six Flags has crossed the Disneyland threshold of $20.00 per ride which we can see with Rise of the Resistance at the moment. It seems that the upwards costs that is being implemented at Disney has now influenced Six Flags. Considering the theme park remained shut down for over a year, it seems they are jumping on the Disney train to make their money back.