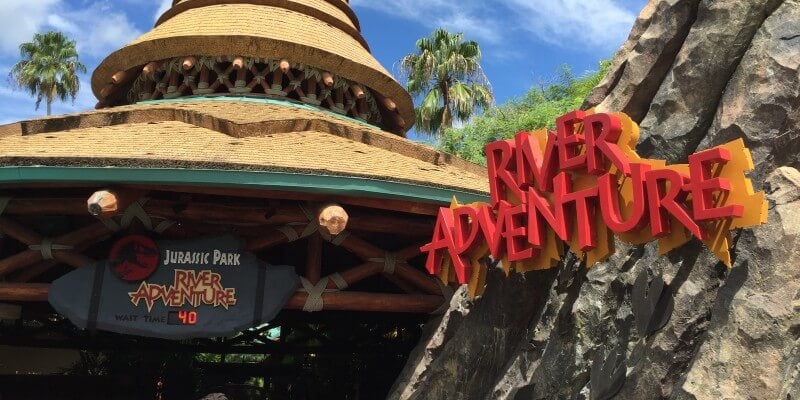 One of the biggest allures to visiting Universal Orlando Resort is being immersed in the magic of some of the most beloved movies of all time.

When Guests visit Universal Studios Florida and Universal’s Islands of Adventure, they are treated to popular IPs like E.T., The Simpsons, Men In Black, Despicable Me Harry Potter, and, of course, Jurassic Park.

Last year, Universal opened the thrilling Jurassic World Velocicoaster, but the addition of the popular coaster may not be the only change coming to the theme park in the future.

In the Jurassic Park River Adventure gift shop, there is a new line of merchandise that features t-shirts from all the attractions in the area, including River Adventure, the Velocicoaster, and Pteranodon Flyers.

However, it seems there is one notable change that can be spotted on these t-shirts. All of them have the Jurassic World logo, including River Adventure.

While on the surface this might not seem like a big deal, it could very well be speaking volumes about what’s in store for the future of Jurassic Park River Adventure.

The ride is already mentioned at the end of the Jurassic World Velocicoaster when Claire tells Owen that he is needed for “an incident over at River Adventure” and the ride has also been criticized by many Universal fans, who have called it “outdated” and in need of major refurbishments.

Jurassic World: The Ride, over at Universal Studios Hollywood, has been a big hit and it would make a lot of sense if Universal was going to go the Jurassic World route to use many elements from that attraction as a way to update the beloved water ride without getting rid of it completely. The name would change and the animatronics and storyline would be different, but the basis of taking a tour and having a large plunge at the end would remain the same.

At this point, however, Universal hasn’t confirmed anything and it would seem that River Adventure will remain intact with the Jurassic Park IP, at least in the short term.

What do you think of potential significant changes coming to River Adventure? Let us know in the comments!