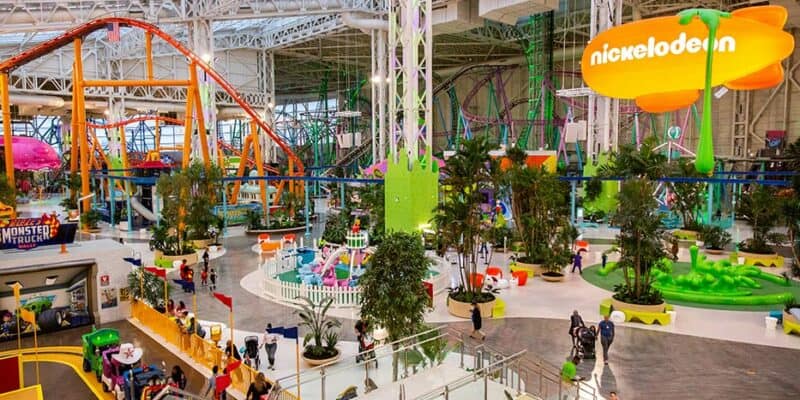 If you are planning on going to American Dream, be aware that out of their five coasters, four of them are shut down.

It is never fun to go to a theme park and find out that the ride you were most excited to ride is closed for the day, or longer. We often discuss how rides at Disney tend to break down throughout the day; however, they are almost always running that same day. Attractions like Haunted Mansion, Splash Mountain, Big Thunder Mountain, Carousel of Progress, and more are just some of the attractions that we have seen temporarily shut down often at Walt Disney World’s Magic Kingdom.

American Dream is an indoor haven of attractions, from Nickelodeon Universe which acts as the indoor theme park, DreamWorks water park which allows you to get wet and wild with Shrek and the gang, it also has the Dream Wheel, black light mini golf, Angry Birds mini golf, a mirror maze, Sea Life, an ice rink, and more. There is a ton to do in this indoor enclosure!

Nickelodeon Universe has IPs like SpongeBob Square Pants, Paw Patrol, Teenage Mutant Ninja Turtles, Airbender, Dora, Blue’s Clues, and more. But at the moment, five attractions are closed down, with four of them being coasters! Below you can see what is not available.

The entry ticket for day is $59.00 per adult, however, with so many rides shut down, and many of them being the more thrilling options of the giant indoor theme park, it may not be worth the money until more options are available.

Rory Maxwell (@rorymaxwell) responded to a thread of theme park enthusiasts discussing the ride closures and is actually opting out of visiting due to the closures, and others followed suit.

I was planning on heading there next week, between landing at EWR and driving to Hershey, but saw that message when I tried to buy tickets… I’ll just have a chilled afternoon.

I was planning on heading there next week, between landing at EWR and driving to Hershey, but saw that message when I tried to buy tickets… I'll just have a chilled afternoon.

Nickelodeon describes the Park as:

This 8.5 acre indoor theme park is the largest of its kind in the Western Hemisphere. It includes more than 30 rides and attractions for all-ages enjoyment and is open 365 days a year. The rides are themed around Nickelodeon shows that range from your younger days through today’s faves — such as Teenage Mutant Ninja Turtles, Jimmy Neutron, Rugrats and PAW Patrol. Plus — as you roam the park, be prepared to get a wave or a high-five from larger-than-life characters like SpongeBob, Dora, the Ninja Turtles, and the star of Blue’s Clues herself!

FLY LIKE SHIMMER AND SHINE AND MORE PRESCHOOLER FUN

What’s it like to ride on a magic carpet with genies-in-training? Little fans will find out on Shimmer and Shine Jumping Genies. Pick your favorite colorful carpet and hold on tight. Little ones will also love Blue’s Skidoo, a mild aerial ride, where they can hop on the back of Blue or Magenta and soar up, down and all around. Then they can sit in the iconic Blue’s Clues red Thinking Chair with Blue right behind them.

BIG AND SMALL THRILLS WITH RUGRATS AND MORE

Family-friendly rides include Bikini Bottom Crosstown Express — a wild bus ride through SpongeBob’s hometown. The swing ride gets an undersea makeover on SpongeBob’s Jellyfish Jam. And you’ve never ridden a carousel like Rugrats Reptar Go-Round! Hop on the back of the Rugrats’ favorite dinosaur and go for a spin. Saying “Roar!” isn’t required, but it’s encouraged. This cool double-decker, all-ages carousel is surrounded by Grandpa Lou, Tommy, Chuckie and Angelica, so have your camera handy.

Big kids, teens and adults can test their limits on the thrill rides at Nickelodeon Universe, many inspired by the Teenage Mutant Ninja Turtles. The Shredder is a super-tall and super-long free-spinning coaster with hairpin turns, plunging spirals, and high-speed spins. Endure the clutches of the Turtles’ most sinister alien foe on Kraang Prime Pandemonium — a 360-degree pendulum swing. Then drop in to Timmy’s Half Pipe Havoc — a unique, skateboard-shaped shuttle coaster based on The Fairly Oddparents.

A Nickelodeon experience wouldn’t be complete without some Slime. Nickelodeon Slime Streak is a splat-designed, family-friendly coaster that zooms above Nickelodeon Universe on a bright orange track.

You can pay one price and play all day. Check out additional rides and stay in the know about Nickelodeon Universe American Dream.

Would you visit a theme park if four out of five coasters were down?