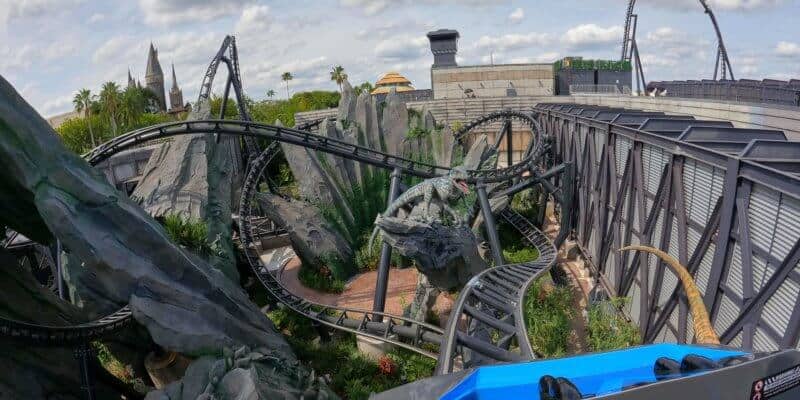 One Universal Guest recently spotted an animal that had laid eggs on top of Universal Orlando’s newest thrill ride.

Related: Universal Toned Down Attraction After Child Allegedly Flew Out Of Ride Vehicle

While Universal Studios is home to many incredible rides and attractions, few can compare to the level of thrills and chills that VelociCoaster offers. Themed to the new Jurassic World franchise, Guests weave and bob around a few vicious raptors while speeding along an intense track. The ride opened last year and has been a big success for the Park. Recently, however, one animal decided the top of the ride would be a great place to call home while creating a bird nest to lay its eggs.

This fascinating sight was shown in a tweet from bioreconstruct (@biorecostruct), which you can check out below:

VelociCoaster Osprey seems to have eggs. The male flew away at sunset. As twilight increased she would pop her head up sometimes. Mostly only the tail feathers seen. At a nest above Dr Phillips HS stadium, across the street from Islands of Adventure.

VelociCoaster Osprey seems to have eggs.

The male flew away at sunset. As twilight increased she would pop her head up sometimes. Mostly only the tail feathers seen.

At a nest above Dr Phillips HS stadium, across the street from Islands of Adventure. pic.twitter.com/1leI0EvALC

Related: Wild Chant Breaks Out On Universal Attraction After Line Jumper is Caught

Now we have known about this bird for a long time as it had called VelociCoaster its home for a while, but the fact that it has now laid eggs certainly suggests it’s not going anywhere anytime soon. The bird is specifically is an Osprey, which we had seen connect with the coaster while it was being constructed, making a home on the tracks. Now, that the ride is functioning, the tracks are a much less relaxing area for the bird, so it seems it found a less busy section of the attraction!

More on the ride below:

Have you spotted this animal at Universal Studios in Orlando?