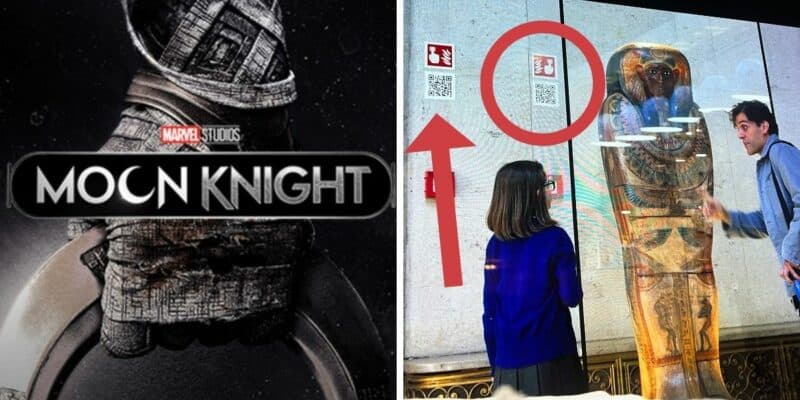 Marvel‘s newest saga on Disney+ follows Steven Grant and mercenary Marc Spector (Oscar Issac), as he finds out. The growing origin story of Moon Knight (2022) is full of action, suspense, treasure and more. Viewers of the superhero story may find an Easter Egg hidden in each episode, leading to a fun surprise. Scan the hidden QR code in each episode of Moon Knight and see what you find!

Eagle-eyed television watchers and curious fans should be looking for tiny, scannable codes in the new episodes of Moon Knight. The unfolding saga of Marc and Steven releases with one hour-long (or so) episode per week, leaving fans with a traditional television schedule. The show plays hard on mirrors, reflections, glass, etc., so look for allegories and additional storyline clues in reflections – including the QR code in episode one! Each QR code will lead the viewer to Marvel.com, where a Moon Knight Marvel comic book is available for complimentary reading.

Just a few minutes into Season 1, Episode 1 of Moon Knight, you’ll notice Steven, a simple museum worker, conversing with a kid in an Egyptian exhibit. Engaged fully with ancient Egyptian culture and artifacts, Steven walks to an exhibit of a sarcophagus in a glass case. On the wall behind them, a QR code is fully scannable for those pausing the television.

Grab your phone and scan the code. It will take you to a Marvel website, where you will get a freebie Moon Knight item. There have been tweets on Twitter alluding to the possible reversal of the QR code in the glass leading to a different free Moon Knight comic, but we’ve determined this to be false as a QR code is traditionally not scannable in reverse, but this one leads, again, to the same website. It’s neat that people have tried this, because Moon Knight relies so heavily on reflections. Werewolf by Night Issue #32 is the gift for this episode.

Season 1, Episode 2 of Moon Knight series brings Steven to a storage facility, as he tries to unravel his mystery. Slowly unlocking locker number 43, Steven disregards the QR code on the locker door. Disney+ viewers scanning this QR code will be led to the same Marvel website. Each week, the comic will shift to a new issue.

If you are just now catching onto the Moon Knight QR code saga, you’ll notice that all the codes will lead you to the “same digital comic.” But scrolling down, the “back” issues released by the Marvel Cinematic Universe are available for reading. What’s interesting is that each issue linked to an episode features a cover image that seems to have influenced the episode. For instance, Episode 2’s issue of Werewolf by Night actually has a werewolf on the cover, much like the animal featured in a battle, and is issue #33.

Sadly, there’s not one. No QR is hidden here, breaking the pattern in Moon Knight, but you will see another issue of Werewolf by Night on the Marvel website. Simply scan an older QR code (or return to the website) and you’ll notice Werewolf By Night: Midnight Means Murder has been added.

New links between the TV-14 episodes and issues remain to be seen, but we’re excited to see what comes next.

Stay tuned to InsidetheMagic.com for more Moon Knight QR links, screenshots and adventures. Have you found these QR codes in the episodes of the newest Marvel superhero show? Leave us a comment below.