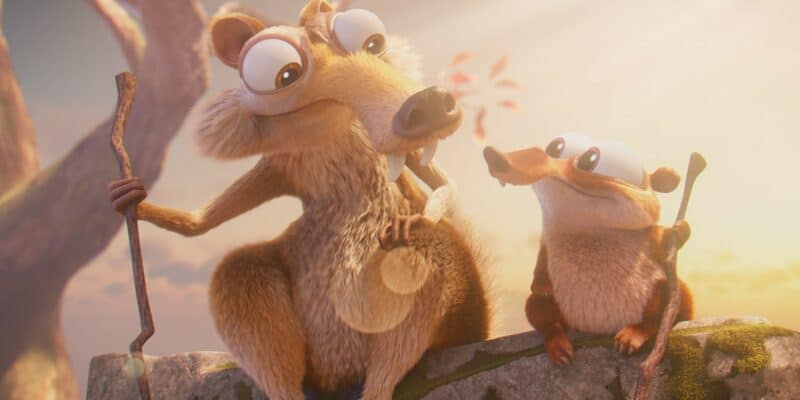 In April 2021, however, Disney officially shut down Blue Sky Studios, upsetting fans of the popular films. Fortunately, the Ice Age saga has landed on the Disney+ streaming platform.

If you’re an Ice Age fan, but you don’t recognize the title Scrat Tales, you’re not alone. This series of six short films was just released on April 13 — a “lost” project, if you will, that Disney released a full year after permanently shutting down Blue Sky.

The project is officially described as:

“Ice Age: Scrat Tales” is a series of six all-new animated shorts starring Scrat, the hapless saber-toothed squirrel of the “Ice Age” adventures, who experiences the ups and downs of fatherhood, as he and the adorable, mischievous Baby Scrat, alternately bond with each other and battle for ownership of the highly treasured Acorn. Featuring the vocal talents of Chris Wedges (Scrat) and Karl Wahlgren (Baby Scrat), the series is produced by Anthony Nisi, with Robert L. Baird and Andrew Millstein serving as executive producers. “Ice Age: Scrat Tales” will debut on Disney+ on April 13.

Intriguingly, even if Disney ultimately decides to revive the Ice Age franchise, it will probably be without Scrat. In January 2022, The Walt Disney Company lost the rights to the character in a lengthy trademark dispute with artist Ivy Silberstein, who allegedly pitched a squirrel character named Sqrat to Blue Sky Studios in 1999, just three years before Ice Age released in 2002.

In January, one article noted:

Silberstein has finally obtained restitution. Blue Sky backed down on January 28, 2022 after nearly two decades of legal battles. “No Scrat in Ice Age 6,” the artist said on Twitter. “Thank you, Disney, for respecting my trademarks and Sqrat which I created on May 19, 1999.” She went on to say that “it’s been 20 years since March 2, 2002 — the premiere date of the first film. It has been a struggle! I won!”

No #Scrat in #Disney #IceAge 6
Thank You @WaltDisneyCo @abigaildisney for Respecting My Trademarks & Character#Sqrat I Created May 19, 1999. 20 Years Ago March 12, 2002 The First Ice Age Released, it's been a 20 Year Fight! I WON! https://t.co/kqanxC0YkI https://t.co/ptM6UgfqJ7 pic.twitter.com/MHq39xOBex

At this time there has been no confirmation regarding when, or if, Ice Age 6 will release.

Have you watched Scrat Tales yet?