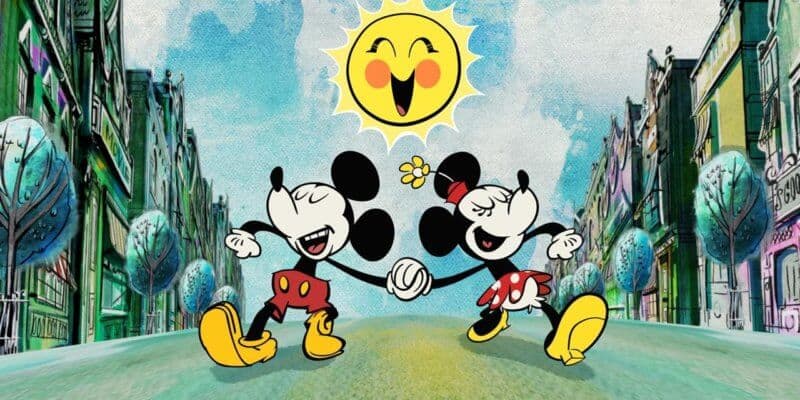 More Mickey Mouse content will be making its way to Disney+ real soon.

Today, Disney+ announced the premiere date and released the trailer and key art for The Wonderful Winter of Mickey Mouse, launching its second season. The second installment consists of four extended-length specials that are themed to each season – winter, spring, summer, and autumn. The Wonderful Winter of Mickey Mouse premieres on February 18, exclusively on Disney+.

The Wonderful Winter of Mickey Mouse, an all-new Original special, is streaming February 18 only on

The Wonderful Winter of Mickey Mouse, an all-new Original special, is streaming February 18 only on @DisneyPlus. pic.twitter.com/RcUmtN4ZFd

The Wonderful World of Mickey Mouse spotlights the endearing, adventurous, and comedic antics of Mickey Mouse, Disney’s #1 star, and is geared towards kids, families, and fans of all ages. It also stars all of his friends, including Minnie Mouse, Donald Duck, Goofy, Pluto, and Daisy Duck. The series is produced by Disney Television Animation with Emmy Award-winning artist and director Paul Rudish serving as executive producer and supervising director. Christopher Willis, the Emmy Award-nominated composer of the “Mickey Mouse” shorts, also provides the music for this series. Philip Cohen is the series producer.

The new animation for The Wonderful World of Mickey Mouse was used on Mickey & Minnie’s Runaway Railway at Disney’s Hollywood Studios in Walt Disney World Resort and the attraction is coming soon to Disneyland Resort in California.

Disney+ is the dedicated streaming home for movies and shows from Disney, Pixar, Marvel, Star Wars, and National Geographic, along with The Simpsons and much more. In select international markets, it also includes the new general entertainment content brand, Star. The flagship direct-to-consumer streaming service from The Walt Disney Company, Disney+ is part of the Disney Media & Entertainment Distribution segment.

The service offers commercial-free streaming alongside an ever-growing collection of exclusive originals, including feature-length films, documentaries, live-action, and animated series, and short-form content. With unprecedented access to Disney’s long history of incredible film and television entertainment, Disney+ is also the exclusive streaming home for the newest releases from The Walt Disney Studios. Disney+ is available as a standalone streaming service or as part of The Disney Bundle that gives subscribers access to Disney+, Hulu, and ESPN+.

For more, visit disneyplus.com, or find the Disney+ app on most mobile and connected TV devices.

Are you excited for the new Mickey Mouse cartoon coming to Disney+?