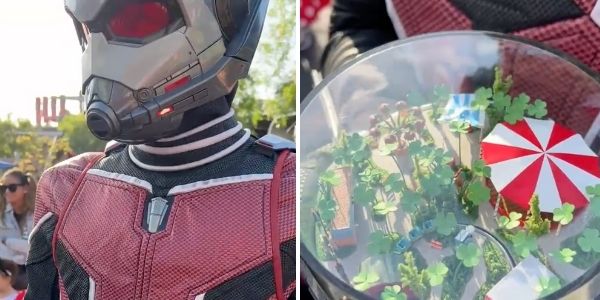 One of the newest additions to the Disney Parks is Avengers Campus which recently opened at Disneyland in Anaheim, California, and will open soon at Disneyland Paris. Here Guests can live out their own Marvel adventures surrounded by iconic characters, food, and rides. However, some Guests were upset that this new land replaced an older land themed to A Bug’s Life (1998) and still feel like it doesn’t compare to the original Pixar-inspired area.

Well, yesterday, for fans of the defunct land, one Marvel character in Avengers Campus was holding something very interesting which you can see in a video below in a tweet from FIVE FIRES (@thecalibae):

As you can see, Ant-Man was walking around Avengers Campus in Disneyland with a small terrarium of sorts that some keen Disney Park fans noticed looked a little familiar. After closer inspection, this shrunken enclosure was actually the entirety of A Bug’s Land, a now-extinct land that used to reside at the Southern California Park. Here, younger Guests could enjoy more tame rides that were all themed to A Bug’s Life (1998).

In the comments, fans went wild and shared their feelings. Danny (@just_ask_danny) said:

The Pixar/Marvel mashup we never knew we needed.

The Pixar/Marvel mashup we never knew we needed. 🥺

I don't want to love this.

But I do love this.

This is the single most clever thing Disney Parks has done in years.

This is the single most clever thing Disney Parks has done in years.

A Bug’s Land was an area of Disneyland California Adventure that was themed around the Pixar animated film A Bug’s Life (1998) and offered many fun and interesting things to do. However, this area was completely renovated a few years back so Disney could welcome its Marvel characters and properties with a brand new area called Avengers Campus.

Disney shut down the “It’s Tough to Be A Bug!” theater along with Flik’s Fun Fair including attractions like Heimlich’s Chew Chew Train, Flik’s Flyers, Tuck and Roll’s Drive ‘Em Buggies, Francis’ Ladybug Boogie and the Princess Dot Puddle Park splash fountain in 2018.

Unfortunately, for fans of the land, it was closed and replaced by Avengers Campus which officially opened last year. At Avengers Campus, Guests can interact with their favorite Marvel characters like Spider-Man, Black Widow, Star-Lord, and the MCU’s most recent addition, Moon Knight. Guests also have a few attractions to choose from including WEB SLINGERS and Guardians of the Galaxy: Mission Breakout!.

Do you miss A Bug’s Land?