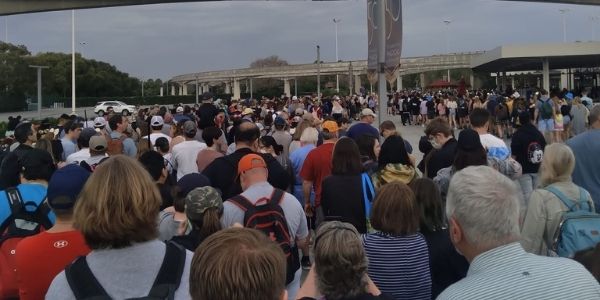 Folks visiting Disney soon may want to double-check Park reservations, as we recently noticed there is very limited availability left for the month of April at the Walt Disney World Resort.

The current crowd levels at the Walt Disney World Resort are nothing short of intimidating. We have seen countless examples of Disney Guests packed tight into the Resort, with all four Parks hitting capacity multiple times. Now, the four Parks have once again hit capacity, and it’s not just for a few days.

As a result of the crowd levels filling the Parks, Disney World has extended the hours of its Park Operations for the rest of the month. Magic Kingdom, EPCOT, Hollywood Studios, and Animal Kingdom have all increased and have all extended their hours, in an attempt to help alleviate the crowd situation. However, after seeing more and more photos pop up from Guests at the Resort, we are not sure how much extended Park hours will actually help due to the strong demand Spring Break has brought in.

As shown on the official Walt Disney World website, reservations have been going fast for the month of April, as nearly half the month is already unavailable to book. As of now, there is zero availability for April 4-7, 11-14, and 18-20 with other dates being very limited as well. The only dates currently with guaranteed access are the 23-30.

For those of you visiting during the month of April, be sure to double-check your reservations!

Are you visiting Disney World soon?