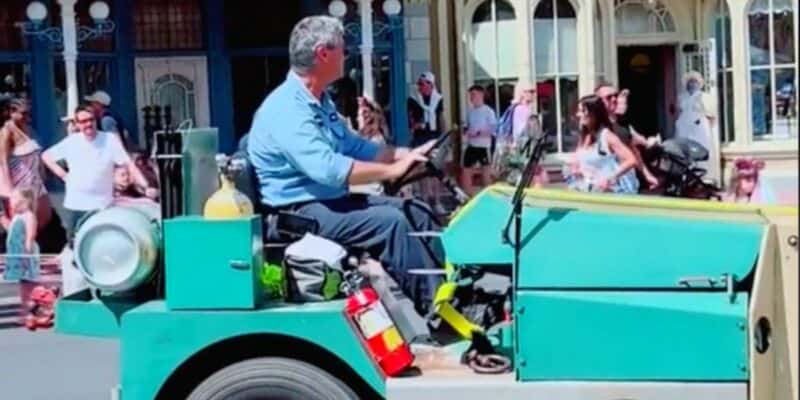 Parades are never infallible. Highly entertaining, Disney parades snake through the Disney Parks all over the world, delighting first-time viewers and continuing to enchant Disney Park regulars. But even though these magical offerings work hard, day after day, they too, are susceptible to breakdowns. But what happens when a Disney parade float breaks down? Disney tries to go on with the show!

What Happens When a Disney Parade Float Breaks Down?

Since the show must go on, we turn to plan B… or C! Typically, the parade will stop where it is, and characters will continue to interact with the crowd, music pumping through the parade route speakers. Since it’s Bluetooth connected, if the parade doesn’t progress, the music will stay “cued” to a certain loop in the soundtrack – it’s a quite marvelous technology.

Cast Members will attempt to remedy the situation themselves, but modern technology will also allow Cast Members driving the floats to call for additional help. If more help is needed, the float can be turned off (if it didn’t already cut off), and a Disney parade float tow truck will arrive on the scene. Using conventional slack lines or larger tow cables, the float can continue along the parade route with characters performing, or… just be towed along until it reaches backstage. The Cast Members at Walt Disney World’s Magic Kingdom Park got a run for their money from the pirates, who assuredly were after Peter and got more than they bargained.  The TikTok Channel @disneyfoodiern shared a look at the bright teal Disney parade tow truck pulling Peter’s Festival of Fantasy Parade crew off-stage, still performing to the waving crowds.

While watching the Soundsational Parade at Disneyland Park, these Guests had to wait some awkward minutes while Cast Members attempted to keep the show on the road. Mickey’s Soundsational float was seen early in the parade being towed by a Disney parade tow truck, while Mickey gleefully continues to perform and the crowds don’t mind a bit.

But then, the parade gets struck to another stop as Tiana’s Soundsational Parade halts near the Hub. Despite Cast Member’s best efforts, the parade tow truck had to intervene and lend a helping hand. While we’re not sure how much time elapsed between the two stops and the resuming of the parade, one must note the music never stops, and all characters continue to entertain the Disney Park Guests! The Fresh Baked team shares the breakdown at Disneyland Park with us:

Everything stops when not one, but TWO parade floats breakdown and need a tow. This video was shot on July 17th, 2013 in HD at Disneyland in Anaheim, California.

Again, the poor Soundsational Parade is bogged with breakdowns. This time, it’s 2013 at Disneyland Resort and Mary Poppins’ float, carrying penguins and chimney sweeps, is the target of error. You can see the mechanics of the float are not running (the bottom of the bike wheel has been removed for towing) since the entire float is “off.” The dark green tow truck takes the float through the parade route and off to the backstage area.

The EarLoveYouLove video is captioned simply, “YOU CAN SEE IN THIS VIDEO WHAT HAPPENS WHEN A FLOAT BREAKS DOWN WHILE THE MUSIC KEEPS ON GOING AUGUST 10, 2013”

Have you spotted the seldom-seen Disney Parade Float tow truck? Which float was it helping along, since the show must go on? Leave us a comment below!

Comments Off on What Happens When a Disney Parade Float Breaks Down?