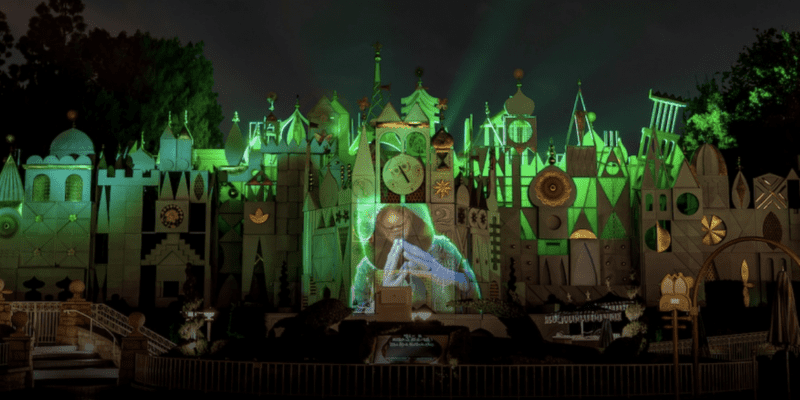 Today has been quite the day for Disney Parks fans. First, we learned of Disney announcing the Guardians of the Galaxy: Cosmic Rewind coaster opening date which will be opening on May 27, 2022. Now, we have discovered that Encanto (2021) will be playing a much larger role in the Parks than we previously thought.

As of April 11, Guests will be able to see the facade of “it’s a small world” change at Disneyland Resort as the Disneyland Park attraction takes a “We Don’t Talk About Bruno” twist. As noted by Disneyland:

Considering how much Encanto has been loved by Disney fans in such a short amount of time, it is not a shock that Disney is looking for fast ways to include the IP in their Parks more. During the day, you can also visit with Mirabel, the young hero from the film, at Frontierland’s Zocalo Park in a colorful photo location that pays homage to the Madrigal family from Colombia. At the moment, Guests can enjoy an Encanto-style booth at EPCOT’s Flower and Garden Festival, with a very Isabella-inspired topiary section.

The @Disneyland Resort is about to get more magical this spring with some new limited-time offerings celebrating @EncantoMovie! 🌟 http://spr.ly/6010KxJC8

The @Disneyland Resort is about to get more magical this spring with some new limited-time offerings celebrating @EncantoMovie! 🌟 https://t.co/AtsKHEsthX pic.twitter.com/I0SMhccy8f

It seems that many are saddened that this will not be taking place at Walt Disney World in any way. Ryan (@HootyWDW50) said:

and…, of course like all modern Disney films released since the pandemic, WDW gets nothing(except for some PhotoPass Magic Shots and minor additions at Epcot’s Flower & Garden festival)

and…, of course like all modern Disney films released since the pandemic, WDW gets nothing(except for some PhotoPass Magic Shots and minor additions at Epcot's Flower & Garden festival)

You guys still have Elena of Avalor at both US parks even tho her series wrapped up two years ago, and yet WDW hasn’t gotten anything major related to Encanto

@WaltDisneyWorld
where the fudge is our Encanto additions, your parks are bigger and slightly more popular than the west

You guys still have Elena of Avalor at both US parks even tho her series wrapped up two years ago, and yet WDW hasn't gotten anything major related to Encanto@WaltDisneyWorld where the fudge is our Encanto additions, your parks are bigger and slightly more popular than the west pic.twitter.com/CPYSIEt47j

Bring to WDW we beg of you. Florida actually has more residents and visitors from South and Central America.

Bring to WDW we beg of you. Florida actually has more residents and visitors from South and Central America.

The sentiment carried throughout many Tweets and online complaints that the IP is not being used enough at Walt Disney World.

It should also be noted that as of April 22, “Main Street Electrical Parade” returns to Disneyland Park and celebrates its 50th anniversary with a spectacular, new grand finale float that brings together stylized scenes from more than a dozen Disney and Pixar stories, including Encanto. Sparkling lights depict the Casita, magical butterflies, and Miracle Candle from the film, with Mirabel and her cousin Antonio, represented as animated dolls atop their section of the float.